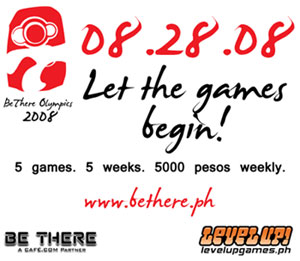 BeThere, a gaming site for casual gamers by Level Up! Games, is hosting their first themed in-game event! And what recent event is has made the most impact to us (and the world) this August? Why, the Olympics of course!

The Beijing Olympics apparently made such a big impact that the guys from Level Up decided to pay homage to this spectacular event that they coined the name BeThere Olympics!

(Actually the logo does seem to look like the 2008 Olympics!)

BeThere is giving away Php5000 peso worth of gift certificates each week to the top player of the chosen game. This week, they are highlighting Sudoku! The event runs for 5 consecutive weeks! So that’s a total of 25,000 pesos worth of GC up for grabs!

For more info visit their official announcement at http://bethereblog.levelupgames.ph

BeThere, btw is absolutely FREE! So head down there now.