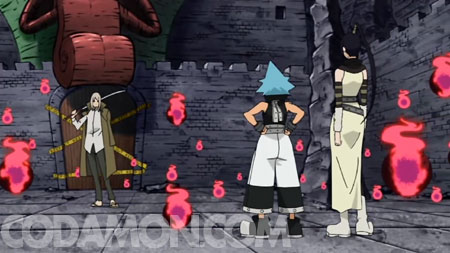 Soul Eater Episode 2 begins where the epilogue from episode 1 left off with Black Star and Tsubaki attempting to assasinate a crime lord’s mansion. The odds are against them 100:2, but they have the element of surprise on their side…

Unfortunately, Instead of taking out the enemy in a quick and stealthy manner as Tsubaki has hoped, Black Star impatiently rushes and announces his arrival to his enemies with his patented entrance. Black Star and Tsubaki were subsequently fired upon and forced to retreat. The Result? A Failed Mission.

Black Star is then tasked to stop the Crime Lord when they mobilize against a witch who has reportedly a strong guardian. But the crime lord beat them to the location and engages the guardian.

Will Black Star get his first Egg of Kishin? Will he beat the witch and get her soul? Or Will inner Naruto spoil things again for the duo of Black Star and Tsubaki?