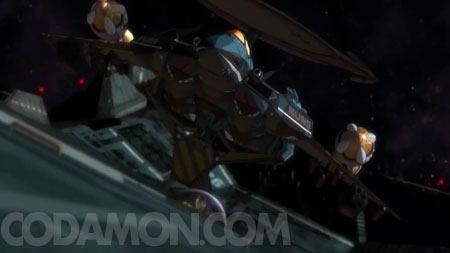 Macross Frontier Episode 6 starts with Ranka being scouted/hired with Ozma’s permission while Sheryl receives news of the attack on Macross Galaxy. Alto still seems to be sorting his feelings about Sheryl and goes looking for her when the President of Macross Frontier publicly acknowledges the existence of the Vajra.

As per their contract, SMS is then placed under the military’s control and are then mobilized for an offensive against the Vajra who attacked Macross Galaxy.

We also get to see the sleek Macross Quarter which presumably acts as an aircraft carrier for the VF units while Sheryl continues with her final performance in Macross Frontier.

Will Alto and Sheryl be a couple? Will Ozma survive this engagement with the Vajra? I cant wait for MAcross Frontier Episode 7!