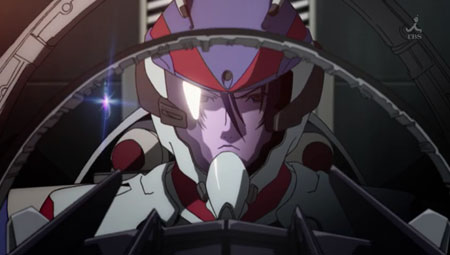 Forces from Macross Frontier have intercepted the Vajra that have attacked Macross Galaxy while Sheryl has started her farewell concert in Frontier. Alto is part of the SMS contingent sent to intercept the Vajra forces but Ozma orders him to stay back which Alto refuses to do, much to Ozma’s chagrin. Their mission is to save the surviving ships including the Kaitos and immediately the presence of the SMS has made their survival chances better.

Suddenly, a Vajra Mothership folds in from deep space and immediately changes the tide of battle. It blasts the battleship Kaitos into oblivion which a big cannon shot and immediately spawns a lot of new Vajra onto the battlefield.

Luca has also been captured while trying to analyze the mothership and is “ingested”. Alto decides to save Luca whatever the cost and rushes into the Vajra Mothership.

Will Alto save Luca? What is inside the Vajra Mothership? I cant wait for Macross Frontier 8!