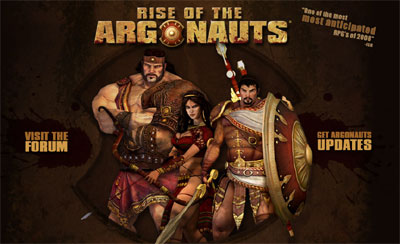 One of my most awaited Xbox 360 games is Rise of the Argonauts from Liquid Entertainment and publisher Codemasters.

IGN previews the game: “Plenty of action games have role-playing elements to help make them more interesting. Take God of War’s experience orb and upgrade system, for example, or even Assassin’s Creed in way, as you upgrade your combat moves by completing primary missions and bolster health reserves through side-quests. While those games are considered action titles, Liquid Entertainment classifies its upcoming Rise of the Argonauts as an action-RPG.”

It looks quite a bit like an action game because the combat takes place entirely in real-time and features an extremely minimal heads-up display (HUD) in an effort to maximize the player’s immersion into the game world. Without a multitude of on-screen bars and gauges, you’ll instead have to pay attention to your character’s posture and wounds, which will show up on the character model wherever they’re hit.

But we’re getting away from the basic setup stuff here. In Rise of the Argonauts, you control Jason and his crew (which includes Hercules, Perseus, Atalanta, and others) aboard the Argos. Basically, Jason’s trying to resurrect his wife, and will need to find the means to do so. With your ship it’s possible to sail all across the game world, giving you the ability to select which path you choose to advance through the game. When you land on islands, you’ll talk to villagers, power-up Jason through shrines, and recruit others to work on your ship.

While Liquid wasn’t willing to give us the whole story on who can be recruited onto your ship and what services they can provide, the developers did mention that Daedalus of Crete could be brought on board to modify equipment. As you go from island to island, he’ll pick up new alloys and be able to craft new gear for you. For example, he can reinforce armor to make it more protective or adjust it to make Jason more mobile, and you’ll be able to see the changes made on Jason’s character model. These kind of modification decisions will be permanent, so you’ll have to choose carefully which processes you want performed.

Jason comes equipped with spear, sword, mace and shield, and can use each weapon type in combat for different effects. Combat won’t be governed by RPG statistics, however, where an enemy’s armor rating might preclude your sword slash from ever doing damage. Instead, if you hit an enemy with a sword he’ll take damage, like in an action game. The trick is to use the right weapon combinations against certain kinds of enemy types, and using the right maneuver to get around their defenses. In fact, Liquid says that under certain circumstances and with the right technique, every enemy in the game can be killed in one hit.