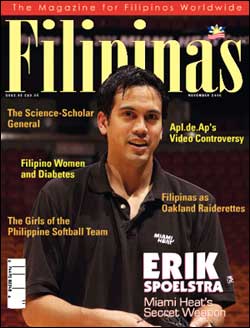 Erik Spoelstra, who has a Filipina mother, was named head coach of the struggling Miami Heat after Hall of Fame candidate Pat Riley decided that “he doesnt want to do this anymore”.

The Palm Beach Post reports: “When I got pushed through the door, I had no head-coaching experience,” Riley said. “Stan (Van Gundy) got pushed through the door (in Miami) and he had no head-coaching experience. Most guys who have become successful head coaches have spent years and years and years applying their trade and getting better.

“When you take a look at the game today, it’s a game about men like Erik who are very, very talented, have an incredible work ethic.””

GMA has already done a feature on the Miami Heat head coach in 2007. Read it here

Spoelstra was born in Portland to an Irish-Dutch father and Filipina mother (Lisa). He was a four-year starter at point guard for the University of Portland and played professionally for two years overseas, where he was the player-coach for a team in Germany. Other than that, his head coaching experience consists of the Heat summer camp.

ESPN Reports: “It’s very rare to have the opportunity to work for one organization for your entire career like I have,” said Spoelstra, who was told the job was his Friday. “It means it’s a special organization.”

Miami finished with the NBA’s poorest record (15-67), by far the worst of Riley’s career. As president, Riley will continue overseeing the plan to revamp a franchise just two years removed from a championship, after deciding he’d best benefit the franchise from the front office.

Last year, Riley said he was committed to coaching three more seasons. Monday, he admitted he never believed that to be true.

“I am definitely sure that I don’t want to do this anymore,” Riley said.

Riley’s future was among Miami’s many offseason issues. The Heat could have the No. 1 pick in the draft, are assured a top-four pick and are certain to make moves in an effort to revamp a roster plagued by injuries.

“Pat Riley has instilled in me values that enabled me to win a championship in just three seasons,” Heat guard Dwyane Wade said Monday. “I’ve seen him do the necessary things to make us winners and I believe that with his focus on being president and his commitment to the team, we will once again become a contender.”

Wade has worked extensively with Spoelstra in practices and 1-on-1 sessions.

“I believe in Coach Spo and have complete confidence that our team will succeed with him at the helm,” Wade said.

Spoelstra indicated he would like to keep assistants Ron Rothstein, Bob McAdoo and Keith Askins.

Unless he comes back — he has once before — Riley finishes his career with 1,210 victories, third most in NBA history behind Lenny Wilkens and Don Nelson. He won seven championships, including five as a head coach, and was voted into the Hall of Fame class this month.

Erik Spoelstra Erik Spoelstra, who has never been a head coach at any level outside of the NBA’s summer league, has been with the Miami Heat for 13 years after starting with the franchise as a video coordinator. Here’s a closer look at his career.
â€¢ 13 seasons on Heat coaching staff
â€¢ Heat assistant coach/director of scouting for the last seven seasons
â€¢ Heat summer league team coach for the last three years
â€¢ Two years as player/coach for Tus Herten (Germany)
â€¢ Played college basketball at Portland
â€¢ Former West Coast Conference Freshman of the Year

“I think the call from the Hall of Fame did something to me,” Riley said. “There was a lot of emotion on that telephone call. When you come to the finish, or you know it’s the best time, it’s a clean ending.”

Riley essentially began the rebuilding job in February, when he traded disgruntled center Shaquille O’Neal to the Phoenix Suns. The move not only rid the team of a player who didn’t want to remain in Miami, but gave the Heat some salary-cap room that wouldn’t otherwise have been available until O’Neal’s contract expired in 2010.

In recent years, many team insiders considered Spoelstra as the person Riley would promote when he deemed the time was right.

That time was Monday.

“He’s a man that was born to coach,” Riley said.

It’s a tactic Riley used before. He stepped down days before the 2003-04 season began, walking into then-assistant coach Stan Van Gundy’s office one morning and asking him, “You ready?”

Van Gundy remained coach for two-plus seasons, resigning 21 games into the 2005-06 campaign. Riley replaced his former protege on the bench and engineered Miami’s march to the 2006 championship.

But the Heat have gone 59-105 in regular-season games since, the second-biggest two-year fall by a championship team in NBA history.

Riley started his head coaching career with the Lakers, winning a championship in his first season with a team led by Magic Johnson and Kareem Abdul-Jabbar. He also took the New York Knicks to the NBA Finals before coming to Miami in 1995, where on the day he was introduced he famously talked about envisioning a championship parade down Biscayne Boulevard.

And if it happens again, it’ll come with Riley watching from off the court.

“I’ve worked for a great leader, a Hall of Fame coach and someone who’s been a great mentor to me for 13 years,” Spoelstra said. “It’s been a great relationship.”

Riley told the story Monday of his final pregame speech. He talked to players that night about the movie “Forrest Gump,” particulary the portion where Tom Hanks’ character spends three years running around the country for no particular reason.

“He was leaving his past behind him. And that’s what we have to do,” Riley said. “I’m leavi”ng mine behind me. I’m leaving last year behind me. It’s been a wonderful experience and it’s been a great journey. Now it’s Erik’s.”