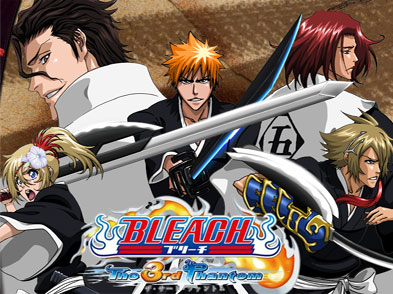 Bleach – The 3rd Phantom is an upcoming Tactical Role Playing Game (RPG) for Nintendo DS based on the popular manga written by Tite Kubo. It will be released in 2008 and be published by Sega. It is reported that this game will feature 180 (!) characters.

Read more about this new storyline by Bleach creator Kubo and the shift to a more tactical gameplay:

This game will feature a new storyline in the Bleach continuity written for this game by Tite Kubo.[3] Two shinigami, Matsuri Kudo and her brother Fujimaru, travel through time to the present day. In the living world, they will meet Ichigo Kurosaki and learn about the true intentions of their 5th Division Vice Captain Sosuke Aizen.

Unlike the two first Bleach DS games, The 3rd Phantom is not a fighting game, but a turn-based tactic game. Two teams fight each others on an isometrically viewed battlefield in a style similar to the Final Fantasy Tactics games. When a character attacks an opponent, the screen switches to a side view, similar to the Bleach DS fighting games. If two teammates are near the same opponent, they can perform a tag team move more powerful than the basic ones. Once the player has won the battle, his characters will earn experience points which will increase their stats and unlock new abilities.