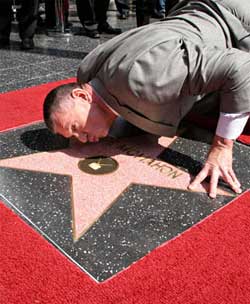 HOLLYWOOD â€“ Vince McMahonâ€™s star shined bright Friday as the WWE Chairman was honored on the Hollywood Walk of Fame. McMahonâ€™s family, colleagues and hundreds of our fans looked on as his star was unveiled on Hollywood Boulevard.

Leron Gubler, President and CEO of the Hollywood Chamber of Commerce, declared it â€œVince McMahon Dayâ€ in the city of Los Angeles. Gubler introduced McMahon and offered a brief history of WWE.

â€œHe is a man who has made television history by bringing wrestling to the world,â€ Gubler said, as the terrazzo and brass star named â€œVince McMahonâ€ remained hidden under a cardboard star, surrounded by a red carpet.

Shane McMahon called his father his hero, and thanked him for all of the wonderful memories throughout his life, which the crowd echoed with shouts of â€œThank you, Vince!â€ Then, Raw Superstar Triple H further pumped up the crowd.

â€œI just need to know one thing before we get started: Are you ready? â€¦ L.A., I said, are you ready?â€ The Game asked our cheering fans.

Describing Fridayâ€™s honoree as an incredible man, Triple H pointed out that McMahon should be revered for the humanitarian and charitable work he does through WWE, such as his involvement with the Make-A-Wish Foundation and WWEâ€™s annual Tribute to the Troops.

Before his star was unveiled, McMahon spoke to the animated crowd, offering heartfelt thanks to the generations of WWE fans in addition to his friends, family and colleagues in the WWE organization, as well as WWEâ€™s Superstars. But there was one more person he wanted to offer a bit of gratitude.

McMahon acknowledged that heâ€™s already a star, but his Walk of Fame landmark offers our fans a permanent fixture on Hollywood Boulevard to pay respect to the Chairman.

â€œDo you realize how many people in this world have wanted to walk all over me?â€ he joked.

And as our fans from around the globe stop to marvel at Vince McMahonâ€™s star on the Hollywood Walk of Fame, theyâ€™ll notice that itâ€™s next to another prominent icon in television history â€“ Kermit the Frog.

â€œYes, my star is next to Kermit the Frog. That says it all,â€ the Chairman smiled.

As his star was unveiled in front of the Hollywood & Highland Metro stop, McMahon posed alongside his wife, WWE CEO Linda McMahon, son Shane and Triple H, as dozens of photographersâ€™ cameras clicked away. The Chairman even took a moment to bow down and kiss his star on the sidewalk.

As McMahon made his rounds with the media after the ceremony, he took a moment to express gratitude to our fans again before speaking with WWE.com.

â€œThank you. Without the WWE fans and our Superstars, none of this would happen. Itâ€™s really in appreciation of them, in recognition of our WWE audience worldwide, and thatâ€™s exactly who Iâ€™ve accepted this star for,â€ McMahon said.

Triple H told WWE.com that Mr. McMahonâ€™s star on the Hollywood Walk of Fame is a huge honor not only for the Chairman, but for WWE as a whole.

â€œThis is not just for Vince; this is a tribute to WWE in general. All the wrestlers from the past and the present, all the people in the office, everybody who works tirelessly, day in and day out, to make WWE what it is â€¦ this is their star also, and itâ€™s a huge honor for all of us,â€ The Game said.

Finally, as Vince McMahon looked down at his star, shining brightly in the Hollywood sun, he pondered why he was given the 2,257th star on the Walk of Fame.

â€œI wonder why it took them so long. Obviously, Iâ€™m the biggest star of them all out here on the Walk of Fame. Literally, as a matter of fact, they made my star just a millimeter bigger than all the rest of them,â€ he quipped with a smile. â€œThey stationed it with two guards â€“ one on each side â€“ so that no one steps on my star, from 9 to 5, throughout the course of the day, you know.â€