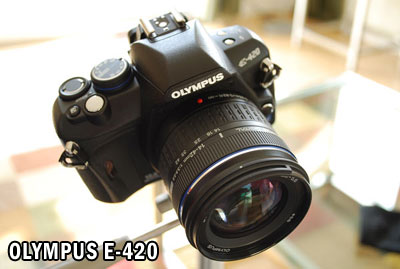 There’s a lot packed into this little package. People who don’t know much about photography but are dying to learn will love certain features, such as the “Perfect Shot” preview, which shows you four white balance alternatives at the same time, so you can pick the most realistic option; it does the same live previewing for exposure settings too. Olympus added face detection to the camera this time around, a popular point-and-shoot option making its way into the DSLRs. People who are afraid of too much data might shirk at all the live shooting options, but the alternative on some DSLRs, including the otherwise awesome new Nikon D60, is no live preview at all. The E-420 has a hell of a lot of tech packed into its relatively small package.