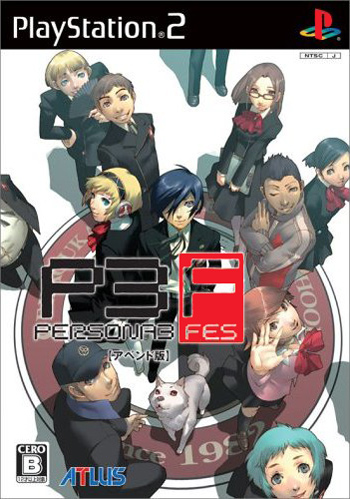 Just ask Atlus. Damn you EYO Sales for messing up my PS2!

On April 19, 2007, Atlus Japan released an add-on disk for Persona 3 called Persona 3 FES (ãƒšãƒ«ã‚½ãƒŠ3ãƒ•ã‚§ã‚¹, Perusona 3 Fesu?). A “director’s cut” version, which included both Persona 3 and Persona 3 FES, was released on the same date. According to the game’s director, Katsura Hashino, the subtitle of “FES” is said to come from the word “festival”.[15]

FES, in addition to adding a great deal of content (both game play and storyline-related) to the main game, includes a continuation of the story entitled Episode Aegis, totaling for an extra thirty hours of game time.[3] When starting a new game, the player is prompted to select Episode Yourself or the aforementioned Episode Aegis. Episode Yourself is the original game with added quests and events, whereas Episode Aegis can be considered a sequel, featuring Aegis as the main character, and the true ending. FES also contains extra costumes and a new weapon synthesis system, twenty-three more Persona, and a “hard” difficulty setting (the original Persona 3 came available with only Easy and Normal modes).

The North American release of Persona 3 did not include the content from FES, although Atlus has not ruled out the possibility of releasing FES there at a later date.[citation needed] On October 19, 2007, a reference to a “Persona 3 Expansion Pack” was posted on the website of professional voice actor Steve Prince (who voiced Takaya in the NA version of Persona 3) under the heading “GAMES TO WATCH OUT FOR”, suggesting that English localization of Persona 3 FES is indeed underway with Prince revealing the name of his role in the game: “Takeharu, Vice Police Detective.” Shortly after the “leak” was publicized on online gaming forum NeoGAF, the reference was removed. In addition, the website of voice actor Liam Oâ€™Brien (who voiced Akihiko in the English localization of Persona 3) was updated to include Persona 3: FES — and similar to Steve Prince’s resume, this was removed shortly after the story broke. However, on the February 2008 issue of EGM, it was mentioned that the add-on Persona 3 FES is coming to North America.[16]

On the 18th of February 2008, Atlus placed a countdown timer on their official site that holds an extremely similar resemblance to the one in the opening of Persona 3. Currently, this is speculated to be a countdown to the an official FES announcement.