Here are some ASUS Eee PC 701 reviews found on the net. Huh? Asus what? if you’re asking yourself that question then take a look at this: More via Pinoy Asus EEE Blog 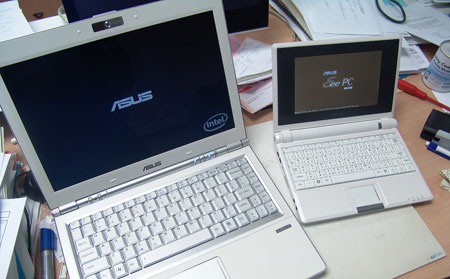 Yep, it’s that small laptop on the right. Reviews after the jump.

Hispazone writes: “But what I like most is its operating system. It is with no doubt the best, not because it is a Linux, I personally donâ€™t have any problem with any operating system, I like them all in general, but this Linux will make much for the users because it is powerful and conventional and absolutely easy to use, actually it is much easier to use than a PDA, because all the main functionalities are at armâ€™s length range and it doesnâ€™t restrict the most advanced users. In fact I think it would be an aberration to see in this PC a Windows XP, what is also possible, but would waste what is for me the soul of this device, an operating system made-to-measure over the commercial distribution Xandros. To lose all its functionality for me would not have any sense.”

Laptop Mag simply adores the Asus EE PC: “This past weekend a circular advertised a Vista-powered laptop equipped with a Celeron processor, 14.1-inch display, an 80GB hard drive, and a DVD drive for only $399. For the same price, the Asus Eee PC offers the same amount of RAM and Celeron processor but a smaller seven-inch display, a measly 4GB of storage space, and no DVD drive. And yet thereâ€™s no way we would give up this two-pound wonder for a â€˜regularâ€™ notebook”

eeeuser.com says: “Well worth the wait”

Notebookreview‘s take on the Asus Eee PC “The Asus Eee PC 701 4G is the new affordable ultraportable notebook that’s bound to be on many consumers’ Christmas wishlists this year. Retailing for somewhere between $299 and $399, the Eee PC isn’t exactly a workhorse, but it will do just about every basic task you’d need from a laptop. Our initial hands-on actually proves it does more than we expected.”

In related news, PC World laments that the Asus Eee PC “gets toasty warm during use. And I don’t mean warm just near the battery–it gets warm all over. The palm rest, the keyboard, the touchpad, and the touchpad’s single select button all felt warm to the touch after just 30 minutes of use. Even the USB drive I plugged into the USB port became warm. The heat only got worse with time and further use. Another issue: My test unit often emitted a low-pitched whirring and grinding noise. While no worse than a hard drive spinning up, considering this unit lacks a hard drive, the noise was disquieting. It was obvious in a quiet room (with only a desktop PCs own low-grade cacophony as background noise), and it was annoying to hear. Not to mention that the noise made me uneasy; I couldn’t help but wonder which component was the source.”