Ok kiddies, It’s Official – World of Warcraft: Wrath of the Lich King Expansion details have just been announced by Blizzard from Blizzcon. Check out some previews, screenshots and official links to World of Warcraft’s next Expansion.

WoW Death Knight Hero Class Compiled Info
This post is a summary of recently given information about the Death Knight in World of Warcraft as posted in the official WoW Forums: There are a lot of things still being worked out with the Death Knight class such as specific spell abilities. Unlike a traditional caster type however, a Death Knightâ€™s spell power comes from runes that are etched into their blade.

When will the expansion be released? How much will it cost?
We have not yet announced a release date for the expansion set. However, we expect to announce further details, including the release date and price, on our community website in the months ahead. Please stay tuned to www.WorldofWarcraft.com for more information.

Blizzard is proud to officially announce the next World of Warcraft expansion set, World of Warcraft: Wrath of the Lich King! With the opening of the Dark Portal, and the renewed war to stop the Burning Crusade’s destruction of worlds, the heroes of Azeroth have given little thought to the frozen wastes of Northrend â€“ and the terrible, ancient powers that wait there. Yet the brooding evils of the fallen Nerubian empire and their malevolent sovereign have not forgotten Azeroth…

World of Warcraft: Wrath of the Lich Kingâ„¢ will open the forbidding wasteland of Northrend to exploration by the hardiest adventurers. New levels of power, challenging new dungeons and encounters, an exciting new character profession, and the game’s first hero class are just some of the new features awaiting players in Wrath of the Lich King. 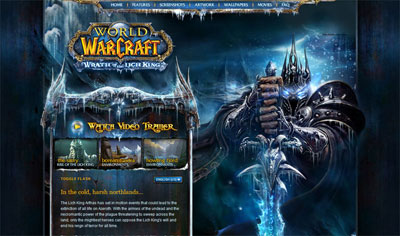 PRESS RELEASE
ANAHEIM, Calif. — August 3, 2007 — Blizzard Entertainment, Inc. today announced plans for the second expansion to World of WarcraftÂ®, its award-winning massively multiplayer online role-playing game (MMORPG). Unveiled at the company’s BlizzConâ„¢ gaming festival before an audience of more than 8,000 gamers, World of Warcraft: Wrath of the Lich Kingâ„¢ will open the forbidding wasteland of Northrend to exploration by the hardiest adventurers. New levels of power, challenging new dungeons and encounters, an exciting new character profession, and the game’s first hero class are just some of the new features awaiting players in Wrath of the Lich King.

“This expansion will add some of the most infamous characters and settings from the WarcraftÂ® universe to World of Warcraft,” said Mike Morhaime, president and cofounder of Blizzard EntertainmentÂ®. “In addition to new story content, Wrath of the Lich King will introduce a number of features specifically requested by players over the past couple of years. We’re looking forward to sharing further details with everyone as development progresses.”

Players last visited Northrend in Warcraft III: The Frozen Throneâ„¢, when Arthas Menethil fused with the spirit of Ner’zhul to become the Lich King, one of the most powerful beings in the Warcraft universe. He now broods atop the Frozen Throne deep in Icecrown Citadel, clutching the rune blade Frostmourne and marshaling the undead armies of the Scourge. In Wrath of the Lich King, the forces of the Alliance and the Horde will venture into battle against the Scourge amid Northrend’s howling winds and fields of jagged ice.

Building on the foundation established in World of Warcraft and The Burning Crusade, Wrath of the Lich King will add a rich variety of content to an already massive game. New features coming with the game’s second expansion include:

* Death Knight Hero Class: Create a high-level Death Knight character — the game’s first hero class — once certain challenges have been met.
* Increased Level Cap: Advance to level 80 and gain potent new talents and abilities along the way.
* Northrend: Explore the harsh new continent of Northrend, packed with new zones, quests, dungeons, monsters, and items — and do battle with the undead armies of the Lich King.
* “Inscription” Profession: Learn this exciting new profession and gain unique ways to permanently enhance spells and abilities in the game.
* Siege Weapons and Destructible Buildings: Take the battle to another level with new player-vs.-player game mechanics and new battlefields to wage war on.
* New Character Customization: Change how characters look and express themselves, with different hairstyles and dance animations.

Since launching in November 2004, World of Warcraft has become the world’s most popular MMORPG, with a subscriber base of more than 9 million players. The game’s first expansion, The Burning Crusade, broke PC-game sales records in North America and Europe by selling nearly 2.4 million copies in its first 24 hours of availability and approximately 3.5 million copies in its first month. World of Warcraft is available in seven different languages and, in addition to North America and Europe, is played in mainland China, Korea, Australia, New Zealand, Singapore, Thailand, Malaysia, and the regions of Taiwan, Hong Kong, and Macau.

For more information on World of Warcraft: Wrath of the Lich King, please visit Blizzard’s official website at www.WorldofWarcraft.com. To keep pace with the continued growth of World of Warcraft as well as development on other Blizzard games, the company is currently hiring for numerous open positions — more information on available career opportunities at Blizzard can be found at http://jobs.blizzard.com.

About Blizzard Entertainment, Inc.
Best known for blockbuster hits including World of Warcraft and the Warcraft, StarCraftÂ®, and DiabloÂ® series, Blizzard Entertainment, Inc. (www.blizzard.com), a division of Vivendi Games, is a premier developer and publisher of entertainment software renowned for creating some of the industry’s most critically acclaimed games. Blizzard’s track record includes ten #1-selling games and multiple Game of the Year awards. The company’s online-gaming service, Battle.netÂ®, is one of the largest in the world, with millions of active users.

12 thoughts on “World of Warcraft: Wrath of the Lich King Expansion details from Blizzcon”