How did he do it? Check out the rest of the post to find out and get the whole view of the Optimus Prime Casemod. 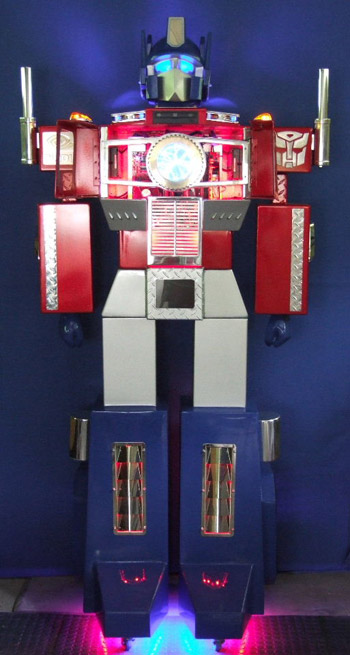 This Optimus Prime PC mod is made out of aluminum from ranges of 14 ga to 1/4″ material and formed and tig welded. It stands 6’10” tall while in transport mode. When I was designing this PC I wanted it to transform in some way or another. It is a Transfomer, what kind would it be if it did not transform. So, I made it transform into a much smaller desktop form. The hands are from casts I made from my own hands. I thought it would be cool to have something of me built into the mod. I used a slideout motherboard design for the MB mounting and external PSU mounted in a custom enclosure mounted on the back. It also has a 7″ LCD screen mounted in the waist to watch movies or such. I made the Autobot Matix center out of a solid peice of brass then milled it on my lathe to accept a 7″ blue plasma disk and mounted on a 1/4″ aluminum frame and polished it to a mirror shine.

For cooling, I used 2 120mm fans on the top of the chest and angled them to blow directly into the GPUs and CPU. It also has a 80 mm fan mounted on the backplane of the MB tray.

When I decided to paint it, I wanted to use Heavy truck colors on it. I decided to use Peterbuilt red and Freightliner blue and silver. After applying the color I shot 1 intercoat of clear with brillant fire red metalflake on the red and colbalt blue on the blue for effect. I then applied 5 coats of clear. I then sanded the entire PC done with 200 grit sand paper and buff it back to shine.