Edge further pads his reputation as the most opportunistic wrestler in the industry when he cashed in on his Money in the Bank guaranteed title shot to pin a worn down and weary Undertaker after a brutal cage match with Batista and a beating from the returning Mark Henry on Smackdown. 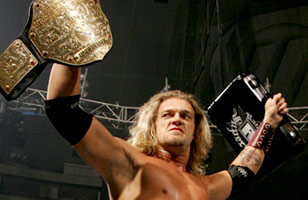 The Rated-R Superstar shocked the Mellon Arena in Pittsburgh by cashing in his newly acquired Money in the Bank opportunity to become the new World Heavyweight Champion.