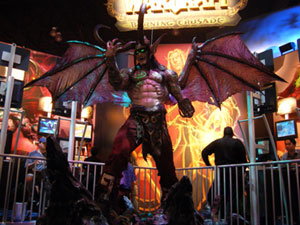 Here’s how they created that amazing Ilidan scuplture that was in Blizzard’s E3 Booth this year.

Who is Illidan? from Wikipedia

llidan Stormrage, brother of the Night Elf Archdruid Malfurion Stormrage, has led a life of misery that has lasted over ten thousand years. Born of the immortal Night Elves, Illidan was a prominent figure in the first war against the demons of the Burning Legion. Illidan and a group of Night Elves were the only ones to embrace the magic of the Well of Eternity outside of Queen Azshara and her elite Highborne priests. In their actions they caused a rift to grow between the Night Elves, primarily between Illidan and his brother Malfurion.