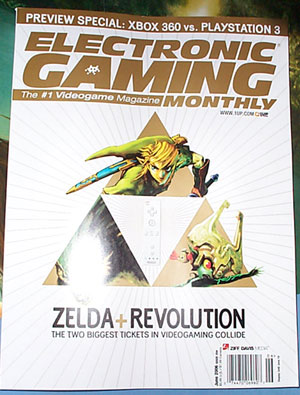 According to 4 Color Rebellion, the latest issue of EGM has posted this information on the Wii’s price at launch, as well as some other details involving the price of virtual console games and Twilight Princess details:

• $249 Price tag
•Virtual Console
• 3d Controller
• ALWAYS online
• Built in speaker on the controller
• No improved graphics on Virtual Console
• TG16 will have it’s 1st party games out at launch, 3rd party will come later as demand increases.
• Estimated prices for the VC are “a few dollars for NES, $5 for SNES and $10 for N64
• VC games are pro-scan enabled.
• $250 “seems appropriate”
• More 3rd party exclusives than the Cube

Zelda information:
•Zelda is 80% complete, delay was for graphic tweaks, wii functions and because they want the game to be measured on a scale of 1 to 120 instead of 1 to 100.
• NO SWINGING THE CONTROLLER for the sword, you just press a button. There are some cases where you will swing though. Reason = you’ll get tired too fast
• Controller does sound effects
• Widescreen on the REV only!
• Navi is only when you play on the REV.
• Something with online is planned but no battle mode.
• More dungeons than OOT already
• More items too