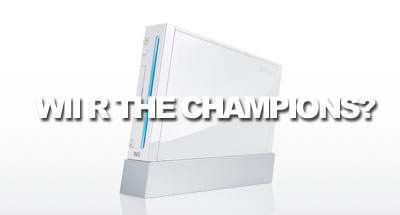 First, MS VP Peter Moore tells Reuters: “Tell me why you would buy a $600 PS3?” Peter Moore said in an interview. “People are going to buy two (machines.) They’re going to buy an Xbox and they’re going to buy a Wii … for the price of one PS3.” and he adds: “People will always gravitate toward a competitively priced product — like what I believe Wii will be — with innovative new designs and great intellectual property like Mario, Zelda and Metroid.”

Now, Sony’s PS3 man Phil Harrison says:“I think Peter Moore is exactly right. I think Nintendo will be the second system consumers purchase after PlayStation 3.” He finishes it off by saying: “I haven’t had a chance to check out the Wii myself, but Nintendo has a great history of innovation and has always done great things for gaming and long may they do so. But as it relates to our strategy they are very much in a different market.”

It seems like Nintendo’s competitor’s are buying into the whole disrupt the traditional videogame industry bit.In previous press releases, Nintendo has always stated that it wasnt in direct competition with Sony and MS, but rather they intend to bring a new gaming experience to gamers and non gamers alike. They have also stressed that Wii will work on any television setup at home and would like to position the Wii as a secondary console to the PS3 and the 360.

Previous game conferences have also predicted that Nintendo’s Wii will be the second console of choice by then current owners of PS3 and 360. With both Sony and Microsoft seeing each other as the only competitors in the so called next gen arena, Nintendo should intelligently exploit the “the enemy of my enemy, is my friend” mentality that seems to be stirring up between Sony and MS.

IMHO The Wii is already an atractive platform for any game developer. Lower development costs, a innovative controller waiting for new ideas, the possibilities of Connect24, Old NES, SNES, Nintendo 64, TurboGrafx16 and Genesis games to make money through the Virtual Console and a lower price point than either the 360 or the PS3. These are very attractive options indeed. If Nintendo delivers the big guns on launch day and back it up with more innovative games while getting ample 3rd party support then expect the Wii to be the Revolution it was supposed to be. It may even do the impossible: it just might even surpass both the PS3 and 360 in terms of sales.