SINGAPORE — September 13, 2013 — Adventurers of the world’s No.1 MO action game, Dragon Nest
SEA will face a new foe unlike any other this September – the Desert Dragon. This mighty beast may be
the third dragon to awaken in Lagendia, but that does not mean Adventurers who have taken down the
first two dragons should be feeling overconfident in themselves. After all, unlike the first two dragons,
the Desert Dragon is the true descendant of the corrupted Chaos Dragon!

It all started when Goddess Altea was poisoned into slumber by her jealous and evil sister Vestinel.
Dragons arose to protect the worlds created by Goddess Altea. Their duty – to safeguard the peace that
Goddess Altea had created, from the darkness of Vestinel. Two dragon brothers, Ancient and Chaos
were the guardians of Lagendia. It was not long before their land was threatened by a growing evil in the
form of a dragon named Beyond. Determined to protect Lagendia, the two dragon brothers fought and
defeated Beyond… but not before the malicious dragon bit Chaos, corrupting the good dragon with evil.
Ancient had no choice but to battle and defeat his brother Chaos. The latter’s death resulted in the
spawn of seven jewels from his body. One of these jewels landed in the desert, where it lay quiet and
unnoticed… This was Desert Dragon Jakard. 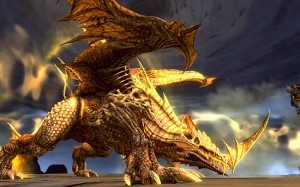 Many years passed, and the Gold Dragon Geraint chanced upon the evil dragon and hid the jewel in an
obscure part of the desert. Little did Geraint foresee that the Desert Dragon’s jewel would be uncovered
by Professor K. The mad scientist performed various experiments on the jewel and documented his
research in a comprehensive report. The Academic’s sister, Jasmine, led her troops from her future into
the present, and straight into the abandoned lab of Professor K where she took hold of Professor K’s
report. By using his extensive research, she awakened the Desert Dragon once more.

As the Desert Dragon is currently the strongest beast in the land, it is highly recommended that players
are at least level 60 before attempting to face her wrath. Desert Dragon Jakard has created a barrier in
the entrance of her lair to keep Adventurers out, but players can easily bypass this by using the Jakard’s
Eye item which can be found in Typhoon Kim Nest or Professor K Nest, both in Hell Mode. Once the
Jakard’s Eye has been obtained, players can proceed to Saint Haven > Garden of Time and Space (Lv
60) > Desert Dragon Nest to challenge their most powerful nemesis to date!

Players will need to defeat the powerful armies of Jakard before facing the legendary monster herself.
Having been bred and trained in the cruel environment like the desert, the minions of Jakard are tough
and know no mercy. The battle will not be easy, but players will be rewarded with access to a secret
bonus stage, should they defeat all 5 sub-stage bosses and find all 5 pots which are randomly located
around the desert, after the defeat of each sub-stage boss.

After clearing out Jakard’s army, the Desert Dragon will be lured out from her hiding place and into the
battlefield. Unlike many MMORPGs where players need a 10-man team to successfully take down boss
monsters, Dragon Nest’s unique 8-man raid system makes it easier for players to team up for an
exhilarating and exciting Nest raid experience!

“The game of Dragon Nest, as its name implies, is about fighting dragons,” said Mr Addison Kang, Vice-President and Producer of Shanda Games International. “Desert Dragon Jakard is the third dragon who
has awakened in the series, so this is a significant update. The immersive storyline brings a whole new
level of gaming experience to the players. With this latest content patch, new players can now experience the
true value of teamwork where they will need precise coordination, communication and cooperation to bring
down the foes in the Desert Dragon Nest!”

Players can head to dn.cherrycredits.com to download the patch or check out the latest happenings.