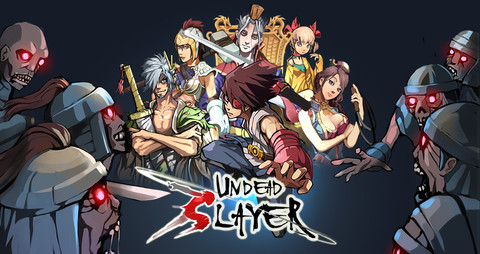 24th January 2013, SINGAPORE – Avid and newbie action gamers alike will have something to look forward to as Undead Slayer, the latest mobile gaming app from Hangame Korea, is making its inaugural debut in South East Asia.

Smartphone users in the region can start downloading this action role-playing game for free beginning 24th January 2013. Set in the popular Chinese classic, Romance of the Three Kingdoms, this one-of-a-kind mobile app has spectacular battle scenes and vividly wild action settings that are extravagant even on a smartphone. And most importantly, this hack & slash game sees no need for virtual pad as it utilizes only a double tap attack making Undead Slayer easier to play on handheld devices.

Undead Slayer is published by Hangame, Korea’s largest online game portal. Hangame is a subsidiary of NHN Corporation, the leading Internet company in South Korea and operator of Naver, the largest online search engine in the country. The quality role-playing feature of this mobile app is famed to have been created by a single developer, Kim Dong-gyu of Hidea. This one-man team constructed the whole of Undead Slayer, from the game’s design and graphics up to its sound and coding. It is available in three different languages, Korean, Chinese and English, and can now be downloaded for free for Android and iOS smartphone users.

Undead Slayer sees the one-eyed hero Xiahou Dun slaying the undead throughout his journey in a world infested with zombies.

“We are proud to announce the launch of Undead Slayer to the South East Asian market and we are confident that this one-of-a-kind mobile game will capture the interest of gamers. With features such as spectacular graphics, visuals coupled with easy-to-play finger movements and the story line of a popular Chinese classic, it will prove to be a hit.” shares the Managing Director of NHN Singapore, Mr. Eric Lee.

Undead Slayer unfolds around its one-eyed zombie-slayer hero, XiaHou Dun, from the ancient Chinese Dynasty, who engages in never-ending battles against the “undead’ as he is stuck in a zombie-infested world. His journey sees him battling with boss monsters and generals, and slashing zombies using the game’s twenty (20) different skill attacks with varying effects and damages.

Equipped with double tap simplicity with 20 unique skills across 90 different stages, Undead Slayer is the latest mobile gaming app that you sure don’t want to miss.

This free-to-download mobile app is fully equipped with simultaneous battlefields which leave gamers no room for yawn. Encompassing 90 different stages and with easy to navigate, quick-touch operations, the game promises thrilling joy and maximum entertainment for players.

“We at NHN Singapore are certain that Undead Slayer’s sophisticated and unparalleled graphics and its easy to manipulate controls will excite all smartphone-owning gaming enthusiasts in South East Asia and get fully immersed in the exciting battle against the undead,“ concludes Mr. Eric Lee.

For more information on the Undead Slayer mobile app, you may visit the following websites: