NBA 2k13 was launched by local gaming publisher XPlay at a lunch event held at the National Sports Grill at Greenbelt 3. Thank you to Mr. Miguel Bauza and Ms. Mel Dominguez for inviting me to the event. 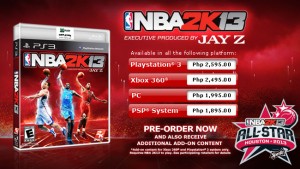 As most of my readers know, the NBA 2K franchise is the king of the virtual basketball world right now and now that EA’s NBA Live 13 has been cancelled, the only virtual basketball game in town. It is exciting to be a part of a game launch in the Philippines for a predominantly console product as it shows that there is a market for quality AAA games despite the threat of piracy as Xplay promises to support NBA 2K13 with marketing events and promotions across its shelf life. 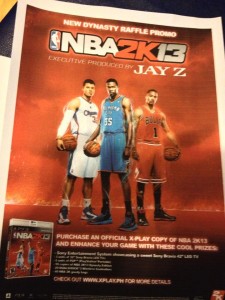 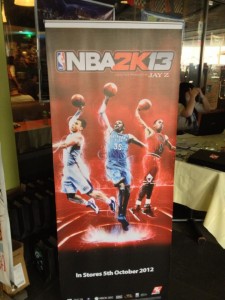 With new features and improvements to existing modes, NBA 2k13 promises to be the best basketball game ever. Rapper Superstar Jay Z is also producing this game so expect fast beats to match the furios pace of the action. We highly recommend NBA 2k13 for anyone even remotely interested in playing videogame basketball.

Don’t forget to join X-Play’s promo and you could win NBA 2k13 goodies or the grand prize of a 42inch LED TV. Join here: http://xplay.com.ph/article/?t=NBA2k13

LOOKING FOR THE DLC? Preordering will get you the All Star Weekend DLC, Xplay will be sending these codes to your email this week.