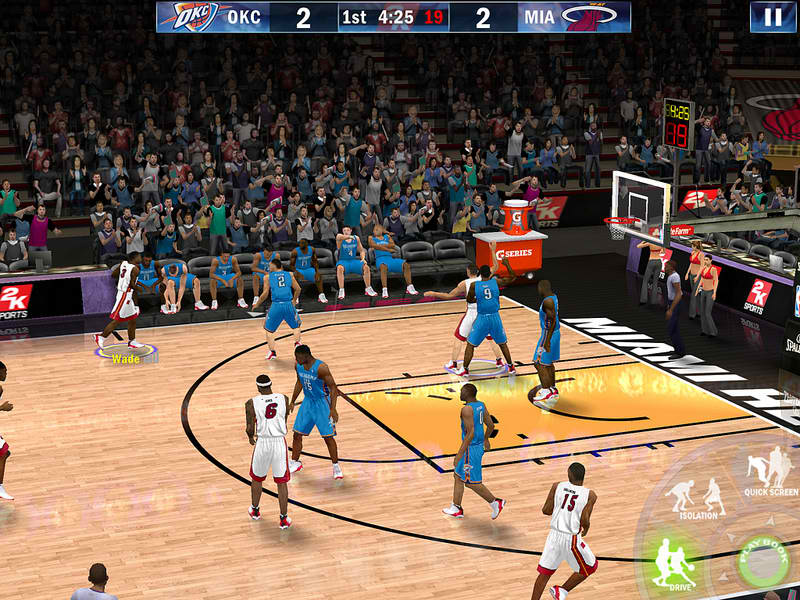 NBA 2K13 is indeed coming for iPhone, iPad, iPod Touch and Android devices. But i’m more curious about the companion minigame app that will be FREE, MyNBA2K and how it will supplement the console and PC versions of the game.

2K Sports today announced NBA® 2K Everywhere, giving fans the opportunity to experience NBA 2K virtually anywhere via an all-new mobile companion application, a social game on Facebook, and a full-featured mobile version of NBA 2K13 for iPhone, iPad, iPod Touch and Android devices. NBA 2K Everywhere will extend the NBA 2K experience by offering players greater flexibility, more variety and new ways to play, at home or on the go, with these all-new social and mobile games. Additionally, both the mobile companion app and Facebook game enable players to feed data and experience right back into NBA 2K13 for the Xbox 360® video game and entertainment system from Microsoft and PlayStation®3 computer entertainment system, introducing a new level of connectivity and continuity to the NBA 2K experience.

The free companion app, MyNBA2K, will be available in October on iPhone, iPad, iPod touch, Android, and Kindle devices. Players can experience a series of entertaining mini-games including shooting practice, free throw drills, a dribbling course, and autograph signing. With intuitive multi-touch controls and a variety of pick-up-and-play training games, MyNBA2K will offer an easy way for players to stay connected to their MyCAREER and MyTEAM experience in NBA 2K13 while away from home. MyNBA2K will be available for free from the App Store on iPhone, iPad and iPod touch or at www.itunes.com/appstore. The app will also available for free on the Amazon Appstore for Android, including a Kindle Fire edition, and on Google Play.

NBA 2K: MyLIFE, 2K Sports’ first ever social game, will launch in October on Facebook. Players can import their MyCAREER avatars from NBA 2K13 to compete in skills competitions with friends, build their home-court environment, and play through experiences of an NBA superstar including earning endorsements and fostering relationships with fellow NBA stars. Accomplishments in NBA 2K: MyLIFE can help unlock clothing, dunk packages, and other rewards in the Xbox 360 and PlayStation 3 system versions of NBA 2K13.

For the second consecutive year, fans can also purchase an authentic, full-featured NBA simulation experience for their mobile devices with NBA 2K13 for iPhone, iPad, iPod touch and Android devices. The new mobile game will be available in October and feature intuitive multi-touch controls, improved graphics and, for the first time, a new multiplayer mode via Bluetooth and Game Center (iOS version only). Fans can also relive some of the NBA’s most memorable games with the NBA’s Greatest Mode.

“Our console game will always be the heart of the NBA 2K franchise, but we want to go beyond that,” said Jason Argent, vice president of marketing for 2K Sports. “Through NBA 2K Everywhere, fans can extend their NBA 2K experience wherever they go, whether it’s on the road with the mobile apps or socially with friends via Facebook. We’re offering more ways to experience NBA 2K than ever before.”

Developed by Visual Concepts, a 2K Sports studio, NBA 2K13 is rated E for Everyone by the ESRB and will be available on October 2, 2012 in North America and October 5, 2012 internationally for the Xbox 360, PlayStation3, PSP® (PlayStation®Portable) system, Wii™ system and Windows PC. The Wii U™ version of the title will be available during the holiday season. Fans are encouraged to pre-order now at participating retailers in order to receive the NBA All-Star content on day one at no extra cost.

Developed by Visual Concepts, a 2K Sports studio, MyNBA2K will be available in October on iPhone, iPad, iPod Touch, Android, and Kindle devices.

Developed by Fifth Column Games, NBA 2K: MyLIFE will be available in October on Facebook.

Developed by 2K China, a 2K Sports studio, NBA 2K13 for iPhone, iPad, iPod Touch and Android devices will be available in October.