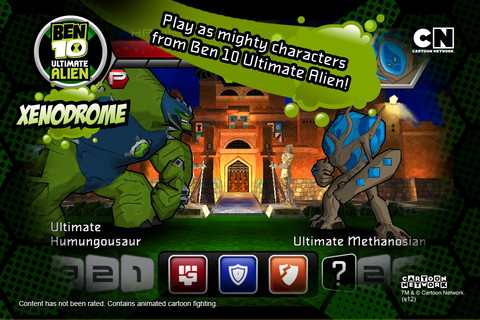 Check out a new game for the iOS, Ben 10 Ultimate Alien Xenodrome! Download it for free on the App Store. Ben 10 Ultimate Alien Xenodrome has been steadily climbing up the charts hitting #1 overall in multiple countries as well as #1 for iPad games and #1 in the Kids/Action genre. The trailer has also been starting to show on the Cartoon Network so downloads should pick up even more.

Download Ben 10 Ultimate Alien: Xenodrome for iOS here:
PH App Store: http://itunes.apple.com/ph/app/ben-10-ultimate-alien-xenodrome/id525694914?mt=8 Or if you arent in the Philippines, just search for Ben 10 Xenodrome on your respective app stores.

Ben 10 Xenodrome Description
Transform, battle and level up in BEN 10 Ultimate Alien: Xenodrome! Play as Ben Tennyson and unlock his alien powers as he takes on the evils of the galaxy. Enjoy solo story mode or battle against other players!

FEATURES
? Intelligent and fun control system
? Level up your alien forms and use Ultimate power-ups!
? Original Turn-Based Battle System – the first of its kind!
? Play as 9 different Alien Forms including Rath, Ultimate Humungousaur, and more!
? 8 Stages to do battle in, from Ben’s hometown to the ends of the galaxy
? incredibly fun endless gameplay!
? Battle against 14 different foes including Charmcaster, Forever Knights, and more!
? One of the largest character rosters in any BEN10 game to date
? Versus Mode battles
? Multiplayer: Users can connect with other players via Bluetooth and play against each other
? Available in the following languages: English, Japanese, Korean, Simplified Chinese, Traditional Chinese, Thai, Bahasa Indonesian
AUSTRALIA: Content has not been rated by Australian Classification Board. Contains animated cartoon fighting