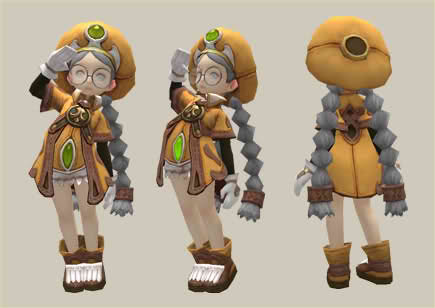 The world of Dragon Nest SEA is buzzing in excitement as Shanda Games International (SDGi) prepares to launch the highly anticipated new character class, the Academic into the fray!

Slated to arrive on April 24, 2012, the Academic looks set to enthrall players with her vibrant background story which complements the existing in-depth story plot of Dragon Nest SEA. Hailing from the future where the evil Red Dragon has destroyed Lagendia, the Academic strives to create a new world by coming back in time to the present. An accident happened during her time travel to the present, resulting in her body regressing to that of a child’s.

The Academic’s innocent child-like exterior belies her powerful skills as an expert range fighter with the ability to use the Cannon and the Bubble Gun, dealing devastating area-of-effects (or AOE) attacks. She is also a competent summoner, able to call upon her faithful robot Alfredo to tank and inflict high damage-per-second (DPS) in battle, particularly useful in sweeping away small mobs. Her abilities are far more devastating once the Academic reaches Level 15 when players can choose to branch her out to either the Engineer or the Alchemist sub-classes.

“The introduction of the Academic gives players a whole new level of game play, based in a rich console action environment, straight on PC,” said Mr Addison Kang, Vice-President and Producer of Shanda Games International. “Unlike characters in other games, the Academic is renowned for her versatility in the battlefield where her unique skill set allows her to take on a tanker or healer role within a party.

Another factor that sets Dragon Nest apart is its rich storyline and it will be interesting to watch how the story of Lagendia will continue to unfold with the Academic class.”

Riding on the strength of its 633,000 Facebook fans, the Dragon Nest SEA team has been rolling out a one-of-a-kind Facebook campaign to tease their fans about the Academic. And if the response to the Facebook campaign is anything to go by, the Academic is proving to be an extremely popular character indeed with a teaser news generating more than 50,000 shares over a weekend.

Meanwhile, players can choose their own adventure with the Academic class campaign in the Dragon Nest SEA Facebook page (www.facebook.com/dragonnestsea) while they countdown to the arrival of the new class in-game on April 24, 2012.