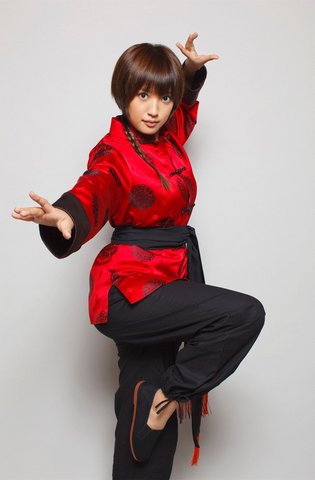 The Nikkan Sports newspaper published a picture of the Ranma 1/2 live action tv special in costume that is inspired by Rumiko Takahashi’s Ranma 1/2 martial arts comedy manga. As a revival of the manga, the Ranma 1/2 TV special tells an original story centering around Akane Tendo (played by Yui Aragaki). Kenta Kaku and Natsuna play the dual male/female roles of the title character.

Other cast members include Kyoko Hasegawa (Angel Bank: Dragon Zakura Gaiden, Dragon Zakura) as the oldest Tendo sister, Kasumi. Tofu Ono, the man who has a crush on Kasumi even as Akane has a crush on him, is played by Shosuke Tanihara (Gekijoban Pocket Monster Best Wishes! Victini to Kuroki Eiy? Zekrom, The Sky Crawlers). Genma — Ranma’s father who transforms into a panda when splashed with cold water — appears in the form of actor Arata Furuta (20th Century Boys, Ping Pong). Katsuhisa Namase (Gokusen, Yatterman) plays Akane and Kasumi’s father Soun Tendo.

In the story, Akane is determined to protect the family’s legacy, its dojo. However, her father Soun suddenly and arbitrarily announced one day that “only men can be heirs.” Unfortunately, this puts Ranma in a bind, since he turns female when splashed with cold water after falling into a cursed hot spring while traveling in China. To return himself to a “full man,” Ranma searches for the “secret hot spring” and gets caught up in a battle with a mysterious enemy. Now Akane holds the key to the story.

The special will air during NTV’s 7:00 p.m. Friday Super Prime timeslot in December. The original manga ran in Shogakukan’s Weekly Shonen Sunday magazine from 1987 to 1996, and Shogakukan printed 53 million copies of the compiled book volumes.

Ranma 1/2 was one of the first anime/manga i have ever seen and it’s nice to see it getting some attention.