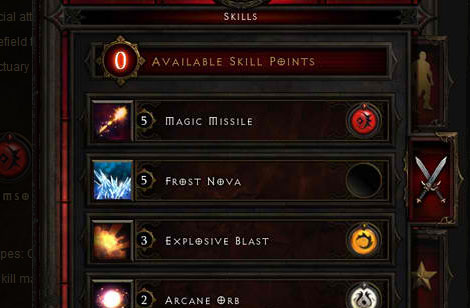 One of the biggest surprises during game journalists hands-on with Diablo III was the changes that had been made to the game’s skill system. In Diablo II, each character class had several skill trees, and players activated – then strengthened – their abilities by allocating points as they levelled up. No more. Instead, a new active skill is unlocked automatically with almost every level gained until players hit the high 20s. Players are free to try all the skills out, with the restriction being the number they can have hot-keyed at once. At the start of the game only two skills can be used, then a new hotkey opens up at level 6, 12, 18 and 24, so that players eventually have access to six skills simultaneously. Each skill can be modified with one of five runestones, and three passive skill slots also open up as players level, letting them choose from a number of additional perks.

It’s a massive overhaul and – as much as we liked the old system – hugely promising. IGN asked Jay Wilson, Diablo III’s Game Director, to give us some insight on when and why the company decided to ditch the skill points system.

“One of the pieces of feedback we got during the internal alpha was that skill points as an element of our skill system didn’t really suit the game,” he told us. “It created a lot of conflict in terms of what the players would choose to do. So what we had is this system that has these six – it used to be seven, now six – slots, that implies that you should have six skills, but a system with skill points? Well, you really want to dump every single point into one skill.

“We also have a system based on progression, so unlike a game like World of Warcraft, [where] if you get fireball at level one, you’re likely using fireball at level 85… Diablo’s not like that. You get Magic Missile at level 1, and certainly, we have ways that we’ve tried to make Magic Missile viable in the end game, but that’s not the reaction players have. They get a higher level skill and they replace that [old] skill, so what we were finding was that people were re-speccing massive amounts of points out of early skills into later skills, and that felt really terrible. So we decided to ask ourselves how much we really felt skill points added, and in surveying a lot of the people who played the game most of them didn’t feel like they added very much…

“I feel that in a lot of ways the current system has more choice involved in it because that finite limit of how many skills you can take versus the number that you have means that you have to make a very restrictive choice, so we focused a lot more on restricting the number of skills you have and having that be the interesting choice, as opposed to skill points, which are really commitments before you even know what you’re committing to.”

1 thought on “Diablo 3: Changes to the Skill System”