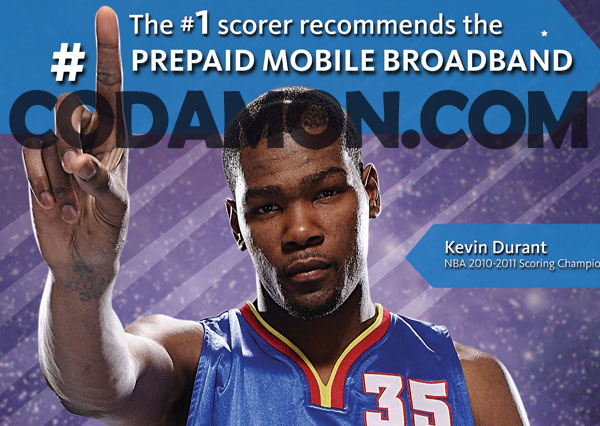 NBA basketball star Kevin Durant, who plays for the Oklahoma Thunder and who is the current NBA scoring leader, has endorsed the Philippines’ number one prepaid broadband service, Smart Bro. Now we know that the NBA vs Smart Gilas exhibition games, featuring Kobe Bryant, Durant, NBA MVP Derrick Rose, wasn’t the only business deal made while the NBA basketball stars visited the Philippines a few days ago. 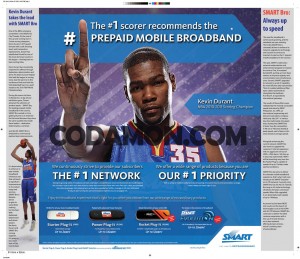 One of the NBA’s emerging contenders is the Oklahoma City Thunder. At the core of this up-and-coming team is 2-time scoring champion, Kevin Durant. A 6’9” guard/forward with a soft shooting touch and tremendous explosiveness, Durant has established himself as one of the most dominant scorers in the league – winning back-to-back scoring titles.

Kevin Durant has consistently improved his offense through dedication, determination and drive. His desire to excel helped him lead the league in scoring twice, lead his team to its first conference finals and lead the USA Basketball Team to a gold medal at the 2010 FIBA World Championships.

During his recent visit here in the Manila for a 2-day all-star exhibition game, Durant attracted the attention of another leader – SMART Bro, the leading prepaid mobile broadband in the country. SMART Bro wasted no time getting Durant as an endorser for the brand because they share the same qualities that made them leaders – dedication, determination, and drive.

Just like KD, SMART Bro is dedicated to continuously explore latest advancements. It is determined to enhance its total mobile broadband infrastructures that will result to significant improvements to its product range and services. Smart Bro is likewise driven to give its subscribers nothing but the best. With dedicated, determined and driven leaders like Kevin Durant and SMART Bro coming together, it’s going to be a team that will be hard to beat.

Yep, this post on Codamon.com was written using Smart Bro.