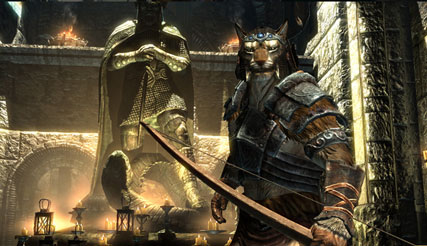 Bethesda’s lead creator Todd Howard shows us 7 freakin’ awesome minutes of Elder Scrolls: Skyrim. We get to see some of the 150 dungeons in the game, the use of dragon shout abilities, the use of water in caves to guide players out, and just an inspiring look at the game engine that Bethesda has created for the sequel to Oblivion.

Make sure to check out the part in the Skyrim video where a dragon just goes around unscripted within the game, terrorizing some troll like creatures who were herding their mastodon pets. Awesome.