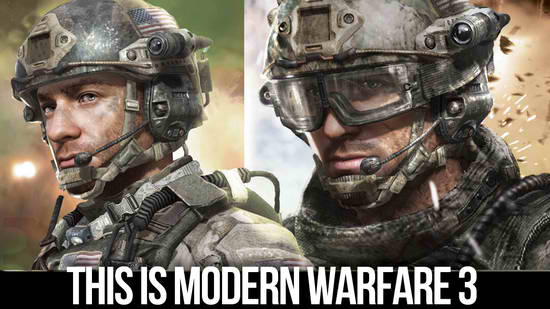 Modern Warfare 3 has apparently been blown wide open by Kotaku: they have Modern Warfare 3 game details, previously unseen screenshots and reposting the entire story online. They also got Modern Warfare’s apparent release date is on Nov. 8, 2011. Activision must be furious. Someone is gonna get fired over this.

In a marketing shift, the new game will be known as Call of Duty: Modern Warfare 3. Modern Warfare 3 is a development collaboration between Infinity Ward, Sledgehammer Games and Raven Software. Every aspect of the game has been expanded and the story begins with a surprise attack on the US by Russia and then jets off around the globe, delivering short, punchy sequences from multiple views – a performance Modern Warfare as a series is famed for.

You’ll take on roles within some of the world’s most elite fighting forces across 15 missions. Modern Warfare 3 will answer most of the questions that arose from MW1 and MW2. There will be familiar faces, but also new characters to take the series forward from here.

Scanning through the story there are some stand-out terrorist set-pieces planned, but nothing of the shock value of No Russian, it seems.

Check out the links below:
The Modern Warfare 3 Files: Exclusive First Details on the Biggest Game of 2011

Call of Duty: Modern Warfare 3 is coming Nov. 8, 2011, Kotaku has learned, delivering with it mammoth battles that engulf a dozen cities around the world including New York, Paris and London.

Multiple sources have shared details of the game’s story, art, sounds and game modes with Kotaku, noting that the game will reshape the landscape of the Call of Duty franchise, bringing an impressive number of eclectic settings, deep multiplayer gaming and a story that ties up nearly all loose ends from previous titles, including the final moments of key figures in the series’ history.

Sources tell Kotaku that Call of Duty: Modern Warfare 3 will have as many as 20 multiplayer maps, though it’s unclear if some will be cut before release or perhaps sold later as expansion packs. The game will also include a powerful mix of mission-based and survival Special Ops modes. While the mission-based levels will be designed like the ones made popular in Modern Warfare 2, we’re told, the survival maps will have players fighting until they’re overcome by increasingly difficult waves of enemies.

Where You’ll Go, How You’ll Kill, and Who Will Die in Modern Warfare 3
SPOILERS in this article. You have been Warned.