The Nintendo 3DS is launching in Japan on February 26th 2011. The following month on March 2011, the 3DS is expected to go on sale in Western markets. Check out the official and final specs of the 3DS and price: 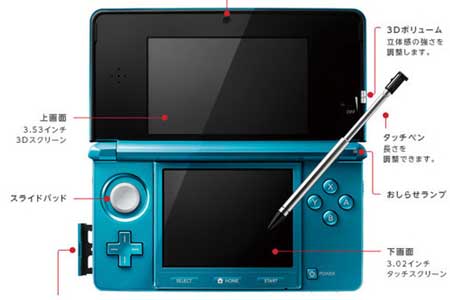 The Nintendo 3DS will come with a charger stand, an AC adapter, a 10cm Nintendo 3DS touch pen, a 2GB SD card, six augmented reality cards as well as instruction booklets. Two colors will be available at launch: “Aqua Blue” and “Cosmos Black”. The Nintendo 3DS is priced in Japan at ¥25,000 (USD$300). Expect the Nintendo 3DS to be initially priced around 15k pesos once it becomes available in the Philippines.

There is a game cartridge slot, an SD card slot, an slot for the AC adaptor and headphones jack. Stereo speakers are on the right and left of the portable’s upper shell. It has a mic, too. Cartridges for the Nintendo 3DS are the same size as cartridges in the Nintendo DS line. As with the DS line, the Nintendo 3DS is powered by a lithium ion battery.