High Moon Studios is hard at work at a new Transformers game powered by the Unreal Engine. This new game will feature Cybertron and it’s various locations, as well as characters we are familiar with and others only the hardcore Transformers fan can identify. TFW2005 has interviewed the Transformers War for Cybertron team to get their thoughts on the new game and it’s alleged similarities to Gears of War. War for Cybertron is due out in 2010 for major platforms. 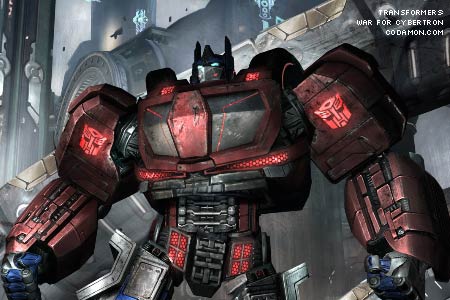 Hasbro, lead by Aaron Archer and the Transformers team, have worked closely with High Moon on development of the game. From characters to places on Cybertron, story arc, and everything else possible, they were in contact. The goal was to tell a story of pre-Earth Cybertron that could be used as a basis for future Transformers stories and generations. It is not connected to any particular generation, but pulls from them all, taking elements, references, story arcs and merges them into this one, new story. If and when possible, Hasbro will try to “stick” to one ongoing cannon, and this could be used as a foundation for it. That being said, it was relayed of course that “Movies are always separate”. For the non-movie products – toys, video games and otherwise – it looks like this could be the start of the latest, and possibly last, Generation. At least for a while, anyway.

The characters chosen for the game took into consideration the need for different styles of game play. So while most familiar faces will be there, Optimus Prime, Megatron, Ironhide, Bumblebee, Soundwave etc, there will be others which fill the need for other types of roles (pure speculation – think jets, boats, spies etc). Scale and general fighting style of the characters helped shape the final roster. Characters not seen in any format for a long time, whether it be toy, comic, cartoon or game – will be making an appearance here. That big guy in the trailer, Omega Supreme. He is in the game, but not as you may think. They left that purposely vague with an implied smiley face. And to clarify, this is 100% pre-Earth, distant past, on Cybertron.

In relation to Cybertron, Iacon will be there (see screen capture of Optimus – the background city is Iacon), as will other Cybertronian locations previously mentioned in past Transformers lore. Nothing else specific was mentioned about Cybertron, but it was said that things which may have only been referenced once, in one comic way back when, could be used and expanded upon. That is how deep they dove for background material to use in the game. Character development is key, they want to lay a foundation that new fans can absorb and have as a reference in future Transformers product and media. Archer and Hasbro let us know that current fans of the franchise will see things they recognize and be able to connect and infer connections to them; all types of people/places/things from the past. Seems like it’s going to be a ton of head-nods to us, but still allowing newbies to jump right in. Something that needs to be done again and again with such a long and diverse history like Transformers has. 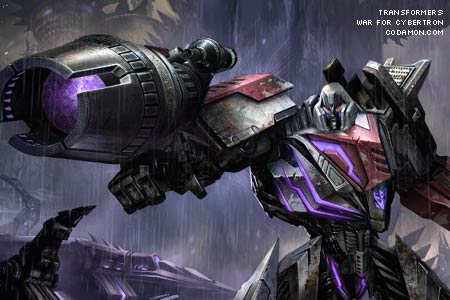 In relation to toys, they said that as they get closer they will evaluate all possible options for maximizing exposure of the game and the brand. So if toys will work, they would consider it.

Q and A with Matt Tieger, Game Director, High Moon Studios
TFW2005: Are any familiar voices returning for the game?

HMS: I think there is a law against making a TF game without Peter Cullen. Side note: he is awesome to work with, his voice is undeniably Optimus.

TFW2005: Will the game offer online and/or offline co-op modes?

HMS: Yup, fans will be able to play the campaigns online with their friends through co-op modes (first time in a Transformers game) or go head to head in intense multiplayer modes. We’ll be divulging more details in the near future, but I can tell you this much – since day 1 on this project MP has been important to what we are doing.

TFW2005: There have been rumors that this game will be heavily influenced by Gears of War. Is this accurate?

HMS: I think a lot of that comes from the fact that we are using the same engine – the Unreal Engine – and that we are 3rd person. However there are some notable differences. 1 – We are not a cover-based shooter (you think Megatron would take cover?), 2 – Transform anywhere, 3 – Special abilities add an additional layer of strategic depth, 4 – finally, Transformers has always been a team based property and each character has unique abilities so teamwork becomes pivotal. NONE of this should take away from the awesomeness that is Gears, honestly if gamers compare us positively to one of the all-time best games ever, I am thrilled!

TFW2005: Will there be downloadable content for the game? If so are you thinking about just extra characters / skins, or extra mission packs as well?

HMS: We are fully committed to this game and plan to support it after it ships as best we can, but we’re not ready to talk about specific details just yet.

TFW2005: Was it going to be War on Cybertron from the outset, or did it begin as a game for a previous Transformers iteration?

HMS: This game has always been about Cybertron. Talk about a setting that is begging for a video game! Fans are going to love it.

WRAP UP
Overall, this looks to be an off-movie-year game that was planned and executed properly. Movie games are great, but they often suffer because of short development cycles. This game however doesn’t have that restriction and has been developed for the sole purpose of being a great game, and great Transformers story. Akin to what Batman Arkham Asylum was, developed outside the movie-game-cycle, with the fans and gamers in mind. Let’s hope they deliver. Transformers War for Cybertron is due out in 2010 from Activision/High Moon on all major gaming platforms.

1 thought on “Transformers: War for Cybertron”