Karos Online is a free-to-play fantasy MMORPG brought to us by Korean publisher NHN and developed by Galaxy Gate (lead developers of Laghaim and Last Chaos). An English release is scheduled for Q4 2009, with German and Turkish versions to follow. 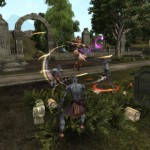 From MMOSITE
“In Karos Online, players take the role of a hero determined to defeat the curse of darkness falling over the world of Asmara and ascend to ultimate glory by becoming the mythical Karos warrior. Through questing, guild clashes and mass PvP, they enter the fight for domination over the world’s vital energy source, Fletta. Fletta provides the basis for the game’s unique and complex alternate progression system; alongside traditional leveling within the game, Fletta energy can be used to increase stats, give buffs, buy resources and enchant items.”