Today, August 5, 2009 marks Mrs. Corazon Aquino’s funeral. Fondly called “Tita Cory”, She was instrumental in leading the opposition against deposed Philippine President Ferdinand Marcos after the death of her martyr husband, Benigno “Ninoy” Aquino. She became the first woman president of the Philippines and has appeared on the cover of Time Magazine twice. She has served as an inspiration for millions of filipinos still looking for hope and progress after the Edsa revolution more than 20 years ago. 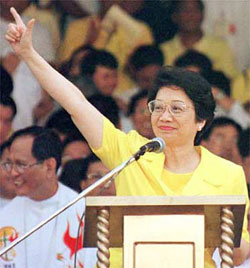 Thank you, Tita Cory. I never met you personally or even claim to have been at the same venue as you. I read about and watched you on TV when i was a little kid/growing up and you seemed larger than life. You seemed to always wear that yellow dress that a sniper would see a mile away, yet you so courageously mingled with the masses and actually did care for them.

Thank you, Tita Cory. Without your sacrifices we wouldn’t be blogging as freely and enjoying things we take for granted today. We probably would be using the web in some government regulated internet cafe where the mere keyword search of sexy babes, online/console gaming and anime would bring down the old Philippine Constabulary down our digital behind.

Thank you, Tita Cory. May you rest in peace.