The Champions Online Open Beta has started and as with any MMO, we are getting a new pacth for bug fixing and other enhancements. Players have been experiencing issues downloading and patching the game but do you expect with 40K+ people downloading the patch and or client at the same time.

Check out my first characters, one is a female gunslinger/ammunitions exper while the second is my Male power armor character. 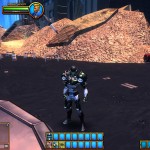 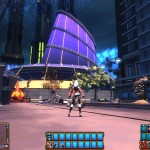 A review and more screenshots of the Champions Online Beta will be posted on this blog soon but in the meanwhile read up on the latest patchnotes: