Square Enix has just recently announced their plans for a more advanced and improved version to their very popular Play Arts line. The new line pays more attention to detail, adds more articulation plus more additional parts with the first figures out being Chris Redfield and Sheva Alomar from Resident Evil 5 which will retail for about $40 each. 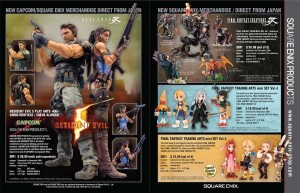 Love the detail on the RE5 figures…Probably guessing they would in the 2k price range here locally.