Here comes a PVC figure from the popular anime Rosario + Vampire! Moka Akashiya, the vampire heroine of the anime, in her awakened state. It’s the very first figure of Moka’s dark side! Sculpted by Hiroshi (Sakurazansen) and distributed by Good Smile Company, it’s not to be missed! 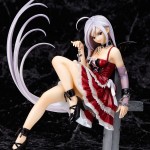 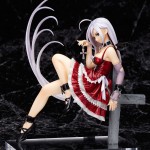 Moka Akashiya Awakened version costs approx 8,200 Japanese Yen and is scheduled to be released on July 2009.