Valve is releasing a sequel for it’s wildly enjoyable Left 4 Dead in record time, announcing today that Left 4 Dead 2 will be hitting both Xbox 360 and PC later this year. Meet your new zombie apocalypse Survivors from the south US of A. 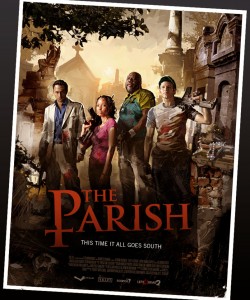 Since Left 4 Dead 2 takes place roughly at the same time as the events of the original and far away in the Southern United States, we’re going to be playing with four all new non-infected humans. Check out the cool poster for The Parish, the first campaign of Left 4 Dead 2.

Preview Left 4 Dead 2 after the jump.

Also promised? Left 4 Dead 2 features “more co-operative campaigns, more campaigns and maps for the Versus game modes than L4D 1, plus support for Survival mode out of the box.” See three new screens of Left 4 Dead 2 in action in the gallery.

Here’s the quick summary: Left 4 Dead 2 will feature five new campaigns, as opposed to the original’s four. Each campaign will have support for four-player co-op, as well as Versus mode and Survival mode. There is one new gameplay mode that is not being revealed at this time. There are four new characters, new weapons, entirely new melee weapons, and new items. On the flip side, there are new zombies, new special zombies, and a bunch of new gameplay mechanics designed to disrupt many of the tactics and exploits that players have discovered in the first game.

Left 4 Dead 2 is set in the American South; there’s going to be more of a narrative thread that connects the campaigns this time around, as opposed to just the seemingly random campaigns of the first game. The story starts in Savannah and works its way to New Orleans. The Savannah campaign is intriguing because all Chet would say is that it’s a city where the zombie infection hasn’t hit yet. We played the New Orleans campaign, called The Parish. It represents the final map in the narrative: the goal is to battle your way through the city, including the famed French Quarter, to reach a military helicopter for extraction. In between, it sounds like there may also be a swamp-based campaign, but that’s all we know for now.

The first thing that surprised us about The Parish is that it takes place in full daylight. Yes, the zombies may like to come out at night, but they’re apparently not indisposed to tearing your guts out in the middle of the day. While it’s weird to be battling zombies while the sun is still up, it’s certainly pretty; there’s something about the friscalating dusklight that makes you want to stop shooting zombies for half a second and just soak it all in. Not every campaign is set during the day, but it does make for a nice change of atmosphere. It also affects the gameplay, as zombies can behave differently during the day. The biggest example of that is the Witch; during the night she likes to sit and cry. However, during the day she likes to wander around like a homeless old woman and cry, and that’s a big recipe for trouble. Chet says that the Wandering Witch has a nasty habit of showing up at the worst possible times — say the middle of a frenzied zombie horde. You might not even notice her until it’s too late.