It is not even E3 yet but Sony has spilled the beans on the PSP Go. Imagine a smaller PSP-3000 where you slide the top portion up to reveal the D-Pad, Select button, Start button, and traditional face buttons. 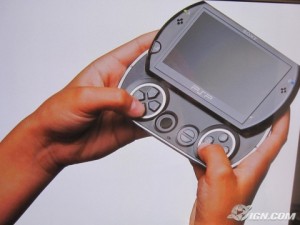 The PSP Go screen is 3.8 inches, the unit is 44 percent lighter than the PSP-3000, there’s no UMD drive, there’s a Memory Stick micro slot, it’s Bluetooth compatible so that you can use a headset and link it to your cell phone, and the unit packs 16 gigabytes of flash memory.

IGN writes that “In terms of the family tree, Koller said that the PSP Go is not replacing the PSP-3000 but that both units will live in harmony on retail shelves — although he did say that Sony likes 10-year lifecycles so the PSP Go should have a bit longer life than the PSP-3000. Still, Koller said the company plans to continue to support both downloadable and retail-based games. Belmont asked if there would be different games for the Go versus the traditional PSP; Koller responded that the units will have a similar catalog to begin with, but with time, he expects there to be some differences — like maybe developers making smaller games that are shorter experiences.”

Thanks to IGN for the source article