The UK government’s Department of Health has launched an incredible attack on the videogames industry with an advertisement linking the playing of videogames to an “early death”. The poster, also backed by charities including The British Heart Foundation, Cancer Research and Diabetes UK, shows an image of a child sitting on the floor holding a PlayStation controller in one hand, accompanied by the slogan: “Risk an early death, just do nothing.” 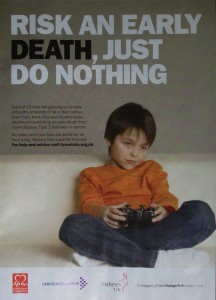 Sony is reportedly considering filing a lawsuit against Change4Life.

On a lighter note, it was reported that Nintendo was busy counting money to notice. On the bright side for pinoys, looks like morons are in abundance in other countries, as well.

The Change4Life campaign, which also features a second, similar advertisement with another child about to eat a cake, is aimed at promoting physical exercise in children, but the clear and public connotations will be unwelcome, to say the least, to an industry working hard to overcome unfounded stereotypes.

The government’s own Byron Review last year noted that there was no solid evidence to link obesity to videogames, while the high profile launch and subsequent stellar sales of Nintendo’s Wii Fit points towards an increasing trend of more active videogames on offer.

A Sony spokesperson was unavailable for comment at the time of writing.

Thanks to Kotaku.com for the article and Gamesindustry.biz for the followup stories.