We all know what netbooks are good at: internet browsing, document editing and the occasional multimedia use. But graphics chip giant Nvidia wants to improve the netbook’s gaming performance via more powerful graphics options for netbooks running Intel’s Atom CPU: 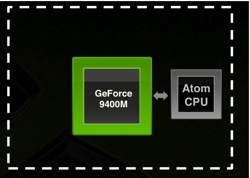 LaptopMag writes: “Today, the GPU maker released its GeForce 9400 + Intel Atom platform (called Ion) that will allow the Intel netbook platform to run a more powerful graphics option. It replaces Intel’s GMA 945 chipset (it is similar in a sense to what we saw on the ASUS N10J, but that system allowed for switching between the Intel and the Nvidia 9300M graphics card, while the Ion platform is Nvidia graphics only). While Nvidia isn’t looking to convert your netbook into a desktop replacement gaming system, it wants to give end consumers the ability to take advantage of the GPU on smaller form factors. So what will the platform bring to future netbooks?”

According to the Nvidia, Ion will improve the graphics and video transcoding performance of Intel Atom netbooks by 10x. Sick of running Windows XP? The GeForce 9400 platform will help netbooks run modern operating systems like Vista and Windows 7. Ion-based systems will also be capable of handling high definition content and outputting it via HDMI. For more details, see our full interview with Nvidia on what the platform can do.

Along with the platform Nvidia is unveiling a Pico-ITX and motherboard nettop reference design that shows off the power of combining its GeForce 9400 platform with Atom processor. See the images in the gallery below.

Nvidia has not announced any OEM partners that will bring the new platform to market just yet, but expects systems to ship during the first half of 2009. As you can read in our interview, the company also hasn’t revealed the pricing but doesn’t expect it to add more than $50 to the total cost of a netbook. The company will be demoing this new small form factor platform at CES next month.