Think you’re addicted to World of Warcraft? I doubt if you can beat this guy: He’s practically a one man raiding team. 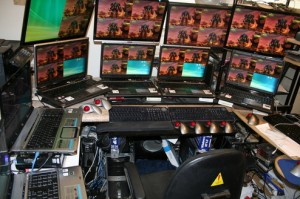 When you can’t convince 35 other people of your master plan to attack two Alliance capital cities, you really only have one alternative: Do it yourself. “Bradster” does. He owns that rig above — 11 computers that run 36 World of WarCraft account simultaneously. His infrastructure costs (to say nothing of his utility bill) weren’t itemized, but he unashamedly admits he pays $5,711 per year in subscription fees to keep together his one-man raiding party (family photo of that on the jump). 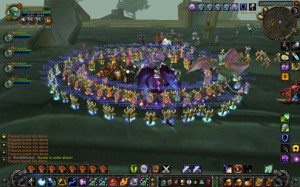 Better yet? He’s going to spend another $1,500 on 36 copies of Wrath of the Lich King so his army of level 80 Shamans can start pounding down Stormwind and Ironforge on day one.

Bradster is a WoW multiboxer. This isn’t a lifestyle I’m all that familiar with, but there are forums and discussion boards devoted to helping players control multiple characters in WoW. It sounds like he has utilities that allow him to start up all of his copies simultaneously, and use his mouse to control eight of these monitors (which look like they have at at least 3 copies running) at once.

“I’m horrified and greatly impressed at the same time. And I thought I took my hooby [sic] too seriously at $1680/year in subscription fees.”

Psssht. $1,680? Night elf, please. So, now I really want to know what Bradster does for a living, a) so he can afford all this shit and b) so he can have the time to play it.