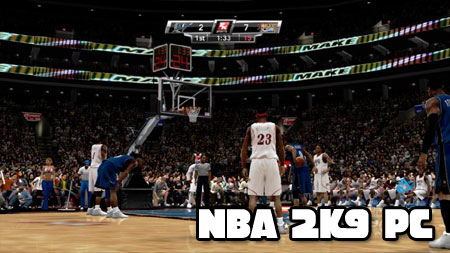 2ksports’ NBA 2k9 will be coming to PC’s everywhere on October 21st, according to a post at the 2k sports forums. This comes after rival basketball franchise NBA Live 09 decided it wont be coming for PCs this year (aka abandoned), breaking a traditional yearly release schedule. Awesome news for NBA 2k9 fans like me. For PC NBA Live players who haven’t played 2k9, 2k8, 2k7 on the xbox 360: This is the best basketball franchise available. Time to upgrade those PC basketball skillz.

* Video card with 128 MB or more memory and one of the following chipsets is required: ATI x1300 or greater | NVIDIA 6600 or greater | DirectX 9.0c compatible card with Shader Model 3.0 support.

Basketball will be coming to your computers this year. Many of you have already seen that NBA 2K9 will be released on the PC on various sites, and I wanted to confirm that. The extra bit of news, however, is that the game will be a XBOX 360 port. It will be released October 21st in PC gaming stores everywhere.”