Aeria Games has just announced that it has acquired Atlus’ Shin Megami Tensei: Imagine Online and are prepping it for a North American and European release. Yep, Megaten Online in English!! Set in a post-apocalyptic Tokyo somewhere between Shin Megami Tensei 1 and 2, players choose one of three factions – the order preserving Law, system crashing Chaos, and mercenary Neutrals – and utilize a real-time strategic fighting system to help defeat the demons running rampant throughout the city. 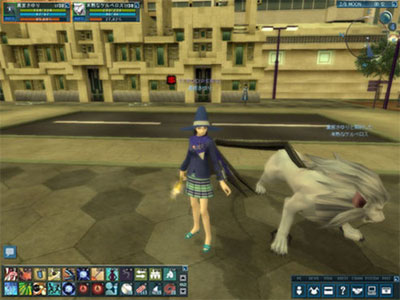 Shin Megami Tensei: Imagine Online features many of the mainstays of the main series, including Devil Partnership and Devil Fusing to create new breeds, my personal favorite aspect of the franchise. Best of all, it follows the free-to-play, microtransaction model, which means you won’t have to shell out big bucks only to discover you hate it.

Megaten Online in English and Free to Play? Sweet!

Shin Megami Tensei is a major intellectual property of the well-known Japanese developer and publisher, Atlus Co., Ltd. The first of many titles in the franchise was released by Atlus in 1992 for the Japanese Super NES and has grown a large and loyal following around the world with additional game titles for consumer consoles and handheld systems. The latest installment brings the brand online.

Originally released in Japan in Q1 2007, Shin Megami Tensei: Imagine Online was Cave’s first massive multiplayer online (MMO) title for PC. MegaTen has become a huge success with a large fan following. Aeria Games plans on bringing that success to the European and North American markets as it has done with its titles Last Chaos and Shaiya.

Set in a fictional post-apocalyptic Tokyo, survivors attempt to restore the city by defeating demons and solving puzzles. Each player acts as a “Devil Buster.” Success relies on forming an alliance with demons or slaying them.

* Strategic Real-time Fighting System – Choose between attacking, parrying and defending in real time.
* Diverse Weaponry – Use a wide array of weapons from medieval swords to modern-day rifles and handguns.
* Devil Partnership – Players negotiate with devils to assist in battle and missions.
* Devil Fusing – Players can combine multiple devils to create new breeds.
* Private Dungeons – In addition to the public battle areas, players can access private dungeons to hunt and collect items with their friends.

More information is available at http://www.aeriagames.com.