Make sure to check out J.J. Abrams’ new series which debuts on FOX next week: Fringe. Coming from the man who gave us Alias and Lost, and soon the new Trek Movie, creator/executive-producer Abrams, Fringe might just be the next step in legitimizing the ever-ghettoized genre of science fiction on primetime television. 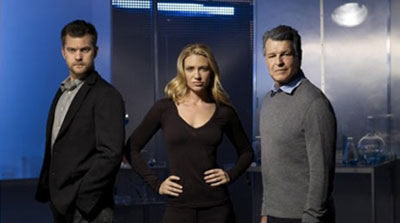 The idea behind Fringe will feel somewhat familiar especially to science fiction fans but the producers insist that it will be a new take on the genre. The show will focus on three main characters: FBI agent Olivia Dunham (newcomer Anna Torv), genius scientist Dr. Walter Bishop (John Noble from the Lord of the Rings films), and Bishop’s son Peter (Joshua Jackson, former resident of Dawson’s Creek). Together they investigate the strange and unknown although the creators also insist that they were not attempting to remake The X-Files with Fringe, FBI agents and supernatural weirdness notwithstanding.

“The title itself refers to fringe science,” says Orci. “So I think the idea is to keep it so that it’s maybe a couple of minutes in the future, but not weeks in the future, not years. We’re trying to do… you can read any of the tech science parts of the newspaper nowadays and there’s just really strange articles in there that 10 years ago would have been, you know, unbelievable, and now it’s like, ‘Oh, the Pentagon has an invisibility cloak.’ It’s like, ‘What?'”

But beyond the science of the show, the strangeness of an X-Files or Twin Peaks is just as important an element. Kurtzman, the resident David Lynch fan on the creative staff, says that the otherworldly aspect of Agent Cooper’s universe will play into Fringe… though perhaps not to the degree that we’ll be seeing any Men From Another Place anytime soon.