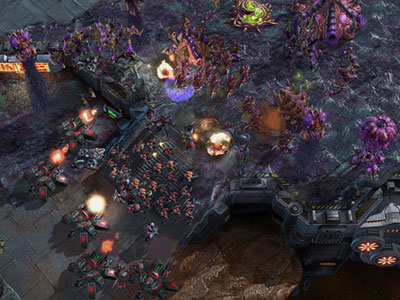 Waiting for Starcraft 2? Kotaku has managed to get their hands on the Zerg at this year’s Games Convention:

Blizzard’s set up at Games Convention this year was identical to the last — one half dedicated to World of Warcraft: Wrath of the Lich King, the other to StarCraft II. What had changed, rather dramatically, was how StarCraft II played, with massively rebalanced Terran and Protoss forces, as well as the inclusion of a playable Zerg.

Having spent considerable time with the Terran and Protoss at BlizzCon last year — and no access to the Zerg at Blizzard’s Worldwide Invitational — I thought it might be fun to take out my old favorite class for a spin.

As you might expect, there was a wait, one that gave me ample opportunity to watch the Zerg in action. Most noticeable was the lovely look of the Creep, the purplish goo that the hivemind race builds upon. It has a constant visual pulse to it, not something that distracts when one actually gets one’s hands on the keyboard and mouse.

That said, the Zerg were probably the hardest race to easily distinguish from their surroundings. Hopefully that’s just due to inexperience and unfamiliarity with the new models, but the move to 3D and a higher resolution does make it a bit more difficult to pick out units.

We were limited to 15 minute gameplay sessions, so there wasn’t exactly time for deep experimentation with the Zerg tech tree. We kept it pretty simple, building Zerglings and Roaches, fellow ground attacker, while tweaking them at the Evolution Chamber. Zerglings felt more like cannon fodder than ever before, as Protoss and Terrans laid waste to clusters of two dozen without too much effort.

Since we haven’t been keeping up with the new Zerg units as much as we should, we were pleasantly surprised to get our hands on the Spine Crawlers. These replacements for the Sunken Colonies can be uprooted and relocated anywhere on the Creep, should you need to restructure your base defense. Very cool.

The Corruptor and Queen are two other early available units, requiring basic structures to build. Unfortunately, we didn’t really get to take advantage of them that much, as the Corruptors are anti-aircraft units, and the AI hit us with mostly ground-based attacks.

What was kind of surprising was how far one had to progress to whip up a couple Hydralisks and make them useful. The unit had always felt a little overpowered in the original StarCraft, but Blizzard looks to be limiting their effectiveness by way of high cost, long tech progression and a more widely spread tech tree.

In fact, the entire tech tree feels that way, as upgrades for units are peppered throughout a wider range of structures and building upgrades. It’s all going to take some time getting used to, as the Zerg felt much more straightforward in their previous incarnation.

After finally getting our mitts on the Zerg, we’re more excited than ever about StarCraft II. We simply can’t wait to annoy you via Battle.net with our crushing waves of Zerglings.