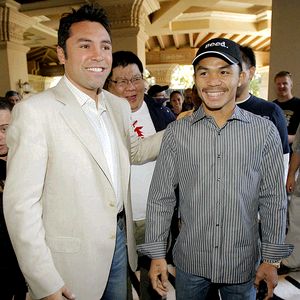 Boxing superstar Oscar Dela Hoya is nearing a deal to finish his boxing career on Dec. 6, 2008 against Filipino boxing star Manny Pacquiao, two people with knowledge of the negotiations told The Associated Press on Wednesday.

The people, who spoke on condition of anonymity because any deal won’t be announced until Thursday, said De La Hoya’s suspended talks with Pacquiao recently revived when both sides found an acceptable way to split the possible $100 million purse from what’s certain to be one of , if not boxing’s most lucrative fight since De La Hoya’s lost a split-decision to Floyd Mayweather Jr. last year.

Barring any last-minute changes of heart in a sometimes contentious negotiation, the fight will bring together boxing’s most bankable star and arguably its most talented fighter at the MGM Grand in Las Vegas. The deal was first reported by ESPN.com.

It hasn’t been an easy match to make. Both boxers must make physical sacrifices for the 147-pound bout, with De La Hoya dropping down to welterweight for the first time in nearly eight years while Pacquiao bulks up to the heaviest weight of his career by far.

The fighters’ camps also argued over the split of the purse, with De La Hoya angling for 70 percent while Pacquiao pursued a 40 percent cut. The resolution to this impasse wasn’t immediately clear, but should be announced Thursday.

De La Hoya (39-5-0, 30 KOs), the six-division champion and Olympic gold medalist, repeatedly has said he won’t fight again after this year. After a proposed rematch with Mayweather in September was scuttled by Mayweather’s retirement, De La Hoya has struggled to find a suitable opponent for his final bout before turning his full attention to his burgeoning promotions company and other business interests.

Pacquiao will have to move up to welterweight to fight the 5-foot-10 De La Hoya, a surprising weight surge for a 5-foot-6 fighter who began his career at 106 pounds.

Freddie Roach, Pacquiao’s longtime trainer, has said his fighter won’t have trouble maintaining his peerless hand speed at that weight, since Pacquiao routinely puts on 10 pounds or more in the 24 hours between weighing in for his bouts and actually stepping in the ring.

De La Hoya beat Steve Forbes by unanimous decision in his most recent fight, but has won just three of his six bouts over the past five years. He considered Miguel Cotto and Sergio Mora for his farewell fight, but realized the most lucrative challenge would be Pacquiao, the relentless Filipino hero who has won eight straight fights since early 2005.

Article via Yahoo!. Image by ESPN