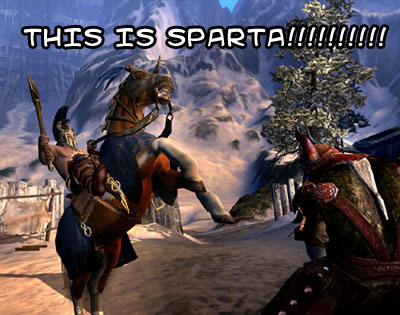 “It seems that somebody has been sticking their sword into the wrong dungeon. The story goes that an Age of Conan player summoned a GM and convinced them to engage in a little “role-playing”. The GM then took the player to a more secluded portion of the game world and (after a bit of hemming and hawing) proceeded to describe an adult scenario in graphic detail.

Best of all? The whole thing is a setup. Shortly after things get really hot and heavy, the player reveals that he lied about his gender before screaming, “THIS IS SPARTA!” and announcing that he has AIDS. It’s times like this where I have to thank God for the creation of the internet.“

Age of Conan’s developer Funcom, understandably, was less amused with the situation and released the following statement:

We are aware of this matter, and necessary measures have been taken against them. We have clear guidelines for all employees in Funcom, not least those who work with customer service, and if the guidelines are broken there are consequences

As the original article says:

Put on your robe and wizard hat because a transcript of the chat conversation, complete with screenshots, is available here. I don’t think I should have to warn you that it’s NSFW, but it’s obvious from the conversation that some people out there still don’t know what’s appropriate when on the job.