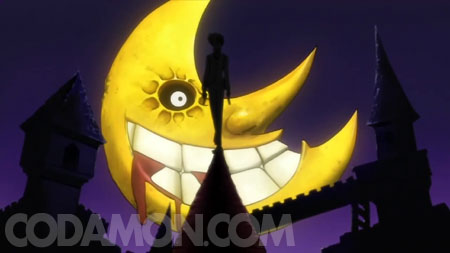 Soul Eater Episode 3 features another Meister named Death the Kid, who is actually Shinigami-sama’s son and has a obsession (OCD) with everything being perfect and symmetrical. His two weapons are called Patty and Liz, and usually are shaped as pistols. And yes, for those counting at home, this means the Kid needs twice the soul requirements for creating a Death Scythe. Not that he needs it since he already is a Shinigami.

The episode starts off with a thief making a run for it after robbing a store. He is then chased down and fired at by Death the Kid. The thief, identified as Lupin, is cornered by Kid, who dishes out a “cool” pose along with his weapons in human form.

Suddenly his Obsessive Compulsive Disorder (OCD) kicks in as he yells at Patty for standing slightly off centered. This makes the Kid stressed out and manages to let Lupin get away.

Kid contacts his father to report what happened. Shinigami-sama then remembers reports of an ancient pyramid where there is a witch reviving mummies. A witch is then shown resurrecting an egyptian style pharaoh, who devours the Witch when he was fully revived.

Will Kid be able to Defeat the Pharaoh? Soul Eater Episode 3.