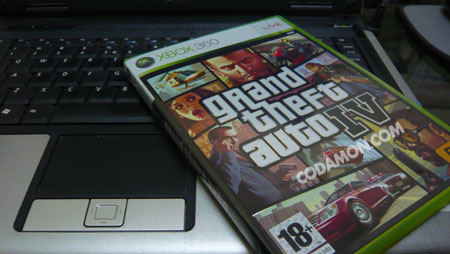 Guess what came in the mail (err delivery) today? Grand Theft Auto 4 for the Xbox 360.

Check this out: I took a cab to get from one island to another and got stuck in traffic along the freeway. After waiting for a bit, i decided to speed things up. I shot my gun from inside the cab, which broke the taxi’s glass, and had everyone on the freeway clearing out. Bad thing is, i accidentally shot of those motorcycling dudes which triggered an ambulance to come running along with some cops. This led to a chase on foot as the path was blocked by the rampaging ambulance and squad cars, which had me running until i cornered an old vehicle. Cops were shooting at me so i had to try and take some of them out, i took out 2 but more came in their place so a car chase ensued with me and a squad car driving off a ramp which triggered the stuntman camera. Unfotunately for the cops, their aim was lousy as they hit a wall while i hit another freeway. F#^#in AWESOME GAME!

Now i know why most reviews of Grand Theft Auto 4 are saying that this is the best game to come out maybe since The Legend of Zelda: Ocarina of Time. Rockstar North has done the impossible: a living an breathing city that exudes much charm and detail that you can lose yourself simply by just driving around. The story and dialogue is witty and top notch, the characters are very memorable, the new suspension system works great, the weather effects are just spot on and did i say this is worthy of a 10/10?

I even got the achievement “Warm Coffee” in my first playtime. Not to mention the strip club experience. Awesome. More in a bit.