Ultimo is a collaboration between the one and only Stan Lee (X-men, Spiderman) with manga artist Hiroyuki Takei (Shaman King). Here is my personal mini review/first impressions of Ultimo: The first thing you will notice when you read this manga will be the narrative or a more obvious version of it as typical seen in a western comic. Expect to see boxes that functions as a explanation on what is going on to seeting the mood for the scene. The art style is a bit of a mix between manga and comics, and generally well done. There are a lot of exclamation marks though that takes me back to the golden age of comics where each and every sound effect was done over the top. 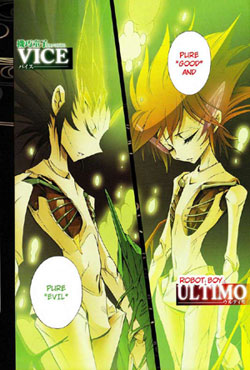 More impressions of Ultimo after the jump.

I will admit i was a bit disappointed with what resulted in the collaboration between two of the more prominent figures in comics and manga. The teaser was a bit dragonball-ish with each character shouting the name of their special move every time they use it. Im hoping the two main characters will be fleshed out more because as it stands each is basically black and white. One of the come ons of Manga, for me, is that you usually have characters with a more “gray”-ish moral characterization and a bit more complex that their standard western counterparts.

I’ll still follow the Ultimo manga when it shows up regularly but i must say i’m not jumping out of my seat impatiently waiting for the followup.