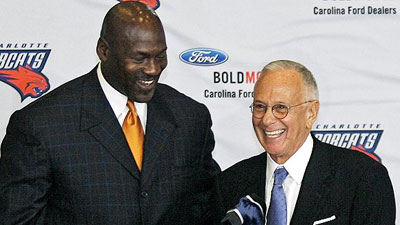 Larry Brown has been tapped by Michael Jordan to steer his beleaguered Charlotte Bobcats to somewhat of a respectable standing. MJ might be the best player there ever was but his moves as a front office exec are disappointing (Kwame?Adam Morrison?). The nice thing about this Bobcats team is that you have 4 budding stars in Gerald Wallace, Jason Richardson, Emeka Okafor and Raymond Felton (Imagine what the Memphis Grizzlies would give to have those players right now!). Charlotte needs someone to assess if these 4 can really mesh together or trade them for more suitable pieces.

But as ESPN reports, the big question will be: Will Larry Brown butt heads with Michael Jordan given his past conflicts with his bosses?

Larry Brown is coaching again, at his ninth NBA stop and in his fourth decade. And history tells us he’s bound to butt heads with Michael Jordan, the managing member for basketball operations of the Charlotte Bobcats.

We’re going to get a reading fairly quickly on how well Jordan and Brown are going to be able to work together, since the long-term future of the Bobcats is about to be affected in a major way by the decision Jordan must make regarding Emeka Okafor — one of two Charlotte players (the other is Nazr Mohammed) who previously played under Brown.

Okafor’s experience with Brown was as part of Brown’s 2004 U.S. Olympic team, which stumbled its way to the bronze medal in Athens with Okafor buried at the end of the bench — he did not make a single field goal during those Games.

Okafor, coming straight from his junior year at the University of Connecticut, was the final player added to that U.S. roster after seven players from the 2003 qualifying team had to be replaced, and Brown was on board with the decision, despite calls from some in the program to add Michael Redd or another shooter to a roster short on perimeter offense.

Brown runs hot and cold on players, so there’s no telling where he now stands on Okafor and how his opinion might shift as Charlotte’s coach. But it bears watching how Brown counsels his new executive partner, Jordan, on the best way to proceed on Okafor and whether there is friction between the two.

The common belief has been that Okafor, who turned down a five-year contract extension worth $60-65 million in October, would take a one-year qualifying offer from the Bobcats for the 2008-09 season that would allow him to become an unrestricted free agent a year from now, and the Bobcats then would decide whether to meet his asking price or move him in a sign-and-trade.

Therefore, if Okafor and Brown were to discover in December that they just didn’t mesh, the Bobcats would be unable to ship Okafor out of town. They would be stuck with him for the full season, and Brown would be under pressure to keep Okafor’s value high so the Bobcats could get value in return through a sign-and-trade.

The Bobcats must tender Okafor a qualifying offer by June 30, and he cannot be traded before then because the contract he played under this season is expiring.

Okafor can be traded as early as July 8 — the same day he can accept a free-agent offer from another team (the Bobcats would have the right to match) or move to that team in a sign-and-trade.

A couple of other things to keep an eye on as the Brown era unfolds in Charlotte with Jordan lurking in the background:

Mohammed is under contract for three more seasons, so Brown probably will be stuck with the player he once packaged with Toni Kukoc, Theo Ratliff and Pepe Sanchez in a trade for Dikembe Mutombo — a deal that helped the 76ers reach the 2001 NBA Finals.

Brown also has to figure out whether to play Adam Morrison, who will be trying to recover from reconstructive surgery on a torn knee ligament and prove he isn’t a bust after Jordan invested the third overall pick of the 2006 draft in him. It remains to be seen whether Brown will get pressure from Jordan to play Morrison, or whether Brown will want Jordan to trade him, as the coach has so often wanted to move players in the past.

We’ve seen this movie before, and if we use Brown’s past experiences with Isiah Thomas, Joe Dumars, Billy King and Donnie Walsh as a guide, we should expect some friction.

Given the timing of the Okafor situation, we might see it soon.